The Importance of Being Darcy 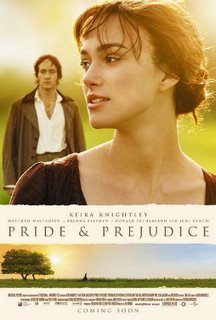 So I went to see the new Pride & Prejudice film with my cousins tonight. We had to drive up to Salt Lake to see it as it was not released in any theaters "down here." It was well worth the trip. The show was sold out and it became immediately apparent that every person in that dark, cozy theater loved Jane Austen and Pride & Prejudice as much as we did. Together, as an audience, we laughed loudly at Mr. Collins' overwhelming smallness. Together we smiled fondly at Mr. Darcy's stilted attempts to interact with Bennet women besetting him from all sides. Together we recited silently the lines we know so well, hearing the echoes in our heads of other actors, other productions, the voices in our heads the first time we read the book. The result was an almost palpable feeling of camraderie.

I laughed more at this film than I have any of the others. And I was sadder to see it end. However much you love Greer Garson or Jennifer Ehle. Whether you prefer Laurence Olivier's haughty aristocrat, Colin Firth's frozen disdain, or Matthew McFadyen's awkward vulnerability, go see this fresh adaptation of Austen's classic novel. Stories just don't get any better.