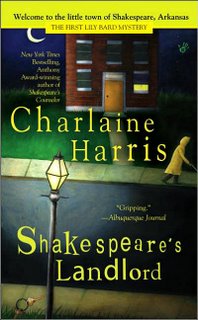 I miss Lily Bard...I miss Jack Leeds. And I miss Shakespeare, Arkansas and all its freaky, endearing inhabitants. For Christmas my mom got me the new Berkely Crime edition of the first Lily Bard mystery, Shakespeare's Landlord, by Charlaine Harris. This is the second series I've read by Harris, the first being the deliciously funny Southern Vampire series featuring the irrepressible Sookie Stackhouse, telepathic barmaid extraordinaire. Lily's story is much darker than Sookie's (despite its distinct lack of vampires) and I was delighted to find myself immediately sucked into Lily's world as she seeks to carve out a life for herself in the not-so-sleepy town of Shakespeare. The next day when I'd finished it, I sat down anxiously at my computer to search out the four remaining books in the series (no small feat, I discovered).

The 2nd book, Shakespeare's Champion, is out of print and hard to find, though I managed to secure a decently priced copy through good, old Abebooks. Don't get me started on publishers publishing series books out of order, with no indication they're doing so, as if they're trying to pull one over on unsuspecting readers. It makes my eye twitch.

The 3rd book, Shakespeare's Christmas, is in print but by a different publisher and none of the local stores carry it. So I ordered that one online as well. There's nothing like getting book packages in the mail.

The 4th and 5th books, Shakespeare's Trollop and Shakespeare's Counselor, respectively, the local stores had in stock in Berkley's new editions. So I blew through all five books, only to read on Harris' website that she has no intention of writing any other Lily Bard mysteries in the forseeable future. And so now I find myself in the old familiar place--nostalgic, morose, trying to fill the void with other books, other characters, when only Lily and Jack will do.