A Month of Reading: July 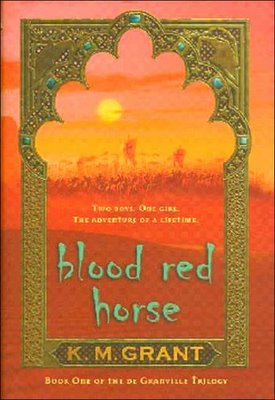 Honey, Baby, Sweetheart by Deb Caletti (This book was a finalist for the National Book Award in 2004. It's good. So very good. I felt I had been in Ruby's shoes. I felt disturbingly comfortable in them. I wished I'd read this book when I was a teenager. It's the kind of book you want to give your daughter and say, "Read this. Know you who are.")
Blood Red Horse and Green Jasper by K.M. Grant (The first two in The de Granville Trilogy. Grant tells a ripping good story of two brothers who go to war, the girl they left behind, and the wonderful warhorse Hosanna. The third book comes out next March. sigh.)
The Princess Diaries Vol. 3-7 by Meg Cabot (So this series continues to make me snicker--in a good way, particularly when Ms. Cabot incorporates the Princess Diaries movies into her storyline as movies made about Mia's life. Hilarious.)
Boy Meets Girl, The Boy Next Door, and Every Boy's Got One also by Meg Cabot (More fluff and stuff by Cabot aimed at adults this time. Told entirely through emails and Instant Messages--it's good for what ails you.)