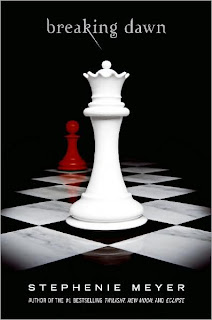 Better late than never, right? I've got good excuses, though. Had a baby. Was reading it aloud with DH. Snatching moments to read whenever and wherever we could...you get the picture. The problem is, what to say now that I finally finished it. Because the truth is the real reason it took me so long to reach the end is that it was....well....boring. Not just the ending, which was utterly lacking in anything resembling a climax, but the entire story. By the end of Book Two I had been sapped of the will to live. Let alone the will to care about the characters anymore.

So, yeah. I'm sitting here feeling a bit betrayed and a bit disappointed. But mostly I'm mystified. I sat there shaking my head throughout the entire third book, my brow furrowed, one sentence on an endless loop in my head, "Wh-, wh-, what happened?" To Bella who was first and foremost an everygirl and not a superhero. To Edward who was vivid and dangerous and not a mere vehicle for exposition. To Jacob who was a protector and friend and not Edward's best bud, stripped of his will and happy about it. And to Alice who was lovely and awesome and present, not absent and useless for the majority of the 700+ pages. None of the characters I'd cared about for three books were themselves in this final volume. Not one.

So set aside the fact that Bella would never name her child that. Set aside the fact that the only enjoyable section (Jacob's) ended in the most absurd (read: revolting) way imaginable. Set aside even the fact that nobody had to sacrifice anything to get their heart's desire (and thus the fact that they achieved that desire is rendered null and void in my mind). The important thing is the characters were not true to themselves. They, like the carefully laid out rules of their world, were summarily bent and reformed into unrecognizable shapes for the sake of providing the bewildered reader with a universal happy ending for every. single. character. It wasn't what this reader wanted and it wasn't what the story needed. But it's what we got.

All of this said, I am glad this most unfortunate of endings hasn't tainted Twilight for me in the least. It remains a favorite and one I'll certainly reread. I'll just stop there.

Links
Just about any link anywhere. Your mileage may vary. Go find the one that floats your boat.