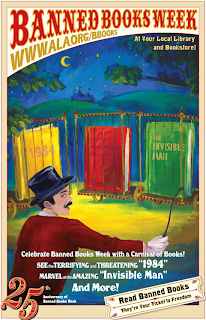 It's Banned Books Week again and time to celebrate your freedom to read. As freedoms go...it's sort of right at the top of my list. Not to be taken for granted. To be defended at all cost. According to the American Library Association, more than 400 books were challenged in 2007. The 10 most challenged titles were:

1. And Tango Makes Three by Justin Richardson and Peter Parnell
2. The Chocolate War by Robert Cormier
3. Olive’s Ocean by Kevin Henkes
4. The Golden Compass by Philip Pullman
5. The Adventures of Huckleberry Finn by Mark Twain
6. The Color Purple by Alice Walker
7. TTYL by Lauren Myracle
8. I Know Why the Caged Bird Sings by Maya Angelou
9. It’s Perfectly Normal by Robie Harris
10. The Perks of Being a Wallflower by Stephen Chbosky
I've read half of the top ten. Go Mark Twain! I love this week as librarians and booksellers all around the nation get together in support of free speech. So get out there and join the fight against the powers of darkness.