It by Stephen King 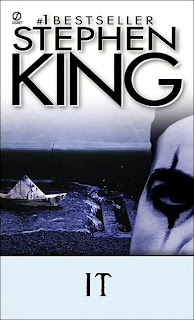 I preface this review by stating (somewhat sheepishly) that this is my first horror novel. Honestly? I've always secretly longed to read a Stephen King book, but I never knew where to jump in. So I contented myself with reading On Writing and his book reviews, admiring the talent from afar, so to speak. Then the other day DHannounced the need for the King moratorium to end once and for all. After a brief but intense conference with a fellow connoisseur, he pronounced himself convinced that It was, without a doubt, the one for me. I took him at his word.
It begins with a great first line:

The terror, which would not end for another twenty-eight years--if it ever did end--began, so far as I know or can tell, with a boat made from a sheet of newspaper floating down a gutter swollen with rain.

We are soon introduced to a boy named Bill who stutters and his cute little brother Georgie who, even I can tell, doesn't have a snowball's chance in hell of making it out of this chapter alive. A few pages later I feel certain I should never have opened this book. There's a freaking clown in the storm drain and I find myself truly creeped out and begging Georgie not to go near the storm drain. Just let the paper boat go and walk away, Georgie!
But he doesn't.
I won't go into the plot too deeply except to say that the story alternates between a series of seminal events in 1958 and again in 1985. The first half depicts the cosmic coming together of seven eleven-year-old kids. Six boys and one girl, self-proclaimed Losers all of them. A stutterer, a wisecracker, a hypochondriac, a fatboy, a birder, a black kid, and a tough girl. These seven form a united front against a trio of unusually vicious bullies. But slowly, and with an almost spine tingling sense of inevitability, they realize they've been brought together for a larger purpose than warding off Henry Bowers and his cronies. Soon they're all in and there's no turning back. Not that any one of them would be able to turn their backs on Stuttering Bill anyway. He is the real heart of the story. The one who never backs down. The one the others would gladly walk through fire for.
It's difficult for me to tell you how much I enjoyed this book. I was hoping I would like it, but, like a blind date, I was a little nervous. Merely crossing my fingers for a good time, you know? Out of nowhere, I fell in love. I mean these kids are So Cool. Work their way into your heart and break it sort of cool. They are outcasts struggling to avoid annihilation not only at the hands of their peers but at the clawlike hands of an apocalyptic evil that has held their town in its grasping grip since time immemorial. I didn't stand a chance. I fell in love with them, with their desperate jokes, with the summer of 1958, and with the interlocking charm and horror with which King shapes his tale. But most of all, I fell in love with Bill. Bill with his glorious silver bike and his burning determination to avenge his brother. I loved the quiet, unassuming way he gathered the other misfits together and made them a part of something important, something noble. One of the best passages in the book:

This section of Kansas Street was known as Up-Mile Hill. Bill took it at full speed, bent over Silver's handlebars to cut down the wind resistance, one hand poised over the cracked rubber bulb of his oogah-horn to warn the unwary, his red hair blowing back from his head in a rippling wave. The click of the playing cards had mounted to a steady roar. The effortful sneer had become a big goofball grin. The residences on the right had given way to business buildings (warehouses and meat-packing plants, most of them) which blurred by in a scary but satisfying rush. To his left the Canal was a wink of fire in the corner of his eye.
"HI-YO SILVER, AWAYYYY!" he screamed triumphantly.
Silver flew over the first curbing, and as they almost always did at that point, his feet lost contact with the pedals. He was freewheeling, now wholly in the lap of whatever god has been appointed the job of protecting small boys. He swerved into the street, doing maybe fifteen miles an hour over the posted speed of twenty-five.
It was all behind him now: his stutter, his dad's blank hurt eyes as he puttered around his garage workshop, the terrible sight of the dust on the closed piano cover upstairs--dusty because his mother didn't play anymore. The last time had been at George's funeral, three Methodist hymns. George going out into the rain, wearing his yellow slicker, carrying the newspaper boat with its glaze of parrafin; Mr. Gardener coming up the street twenty minutes later with his body wrapped in a bloodstained quilt; his mother's agonized shriek. All behind him. He was the Lone Ranger, he was John Wayne, he was Bo Diddley, he was anybody he wanted to be and nobody who cried and got scared and wanted his muh-muh-mother.
Silver flew and Stuttering Bill Denbrough flew with him; their gantry-like shadow fled behind them. They raced down Up-Mile Hill together; the playing cards roared. Bill's feet found the pedals again and he began to pump, wanting to go even faster, wanting to reach some hypothetical speed--not of sound but of memory--and crash through the pain barrier.
He raced on, bent over his handlebars; he raced to beat the devil.

If that scene doesn't get you in your gut, you might be dead inside. I can't believe I waited this long to read it. I stayed up nights reading, glancing over my shoulder every few seconds, looking for something orange and silver creeping up behind me, scared to the tips of my toes but unable to put it down. You were absolutely right, babe. It was the one for me.