The Hollow Kingdom by Clare B. Dunkle 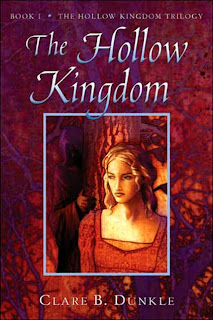 I have had the entire Hollow Kingdom trilogy sitting in my TBR stack for awhile now and finally settled in with the first one and read it through. The first thing to catch my eye was the dedication. This is often the case with me. I was wandering the bookstore with my cousin just other night, talking about what a sucker I am for a good dedication. I should probably be keeping some sort of top ten list or something. If I did, Laurie R. King's dedication in The Game would certainly be on it.

For librarians everywhere, who spend their lives in battle against the forces of darkness.

That one still sends chills down my spine, it's so awesome. I've fallen in love with many a Lloyd Alexander dedication as well and that's why this one in The Hollow Kingdom stood out to me. Because it was dedicated to him.

This book is respectfully dedicated to Lloyd Alexander, who gave the world Eilonwy and brought Gwydion back to life.

Yep. Another happy dance-inducing dedication.
Kate and her younger sister Emily arrive at Hallow Hill in search of a new home. Recently orphaned, the two sisters have inherited the estate and come to live with their two muzzle-headed great aunts and their one creeperiffic guardian. The girls take to the new surroundings immediately, but soon after moving in Kate starts to feel like she's being watched. One night while out walking she is actually followed home by a mysterious hooded stranger on horseback. The stranger turns out to be the goblin king Marak. Every goblin king must steal a human bride and bring her home to the kingdom under the hill to live forever, never to see the sun or stars again. Once he sets his sights on Kate, Marak assures her it is only a matter of time til she is his. Kate manages to keep an admirably stiff upper lip, under the circumstances, and resolves to outwit the goblin king and remain above ground. Unfortunately, she is forced to reconsider when her sister is kidnapped and she is sure the Marak is behind it. In a wonderful reversal of expectations, Kate (of her own free will and choice) gains entrance to the goblin court and agrees to marry the king if he will release her sister.
The Hollow Kingdom is completely enchanting. It was the characters that won me over. Kate is a strong, thoughtful heroine and her sister Emily provides a good bit of comic relief as she is interested in absolutely everything. The prospect of spending the rest of her life among goblins strikes terror in Kate's heart, but sends Emily into raptures. What an adventure! But then it's not Emily who has to marry one of the ugly creatures. Which brings us to Marak. And Marak is an enigma. Crafty and cunning, he delights in attempting to capture his chosen bride and force her to do his will. Yet he is not without sympathy. He rushes to his wife's defense at any slight and, even as he laughs at her discomfort, he tries to make her more at home in his underground world. A favorite passage:

"Marak?" she said softly, turning toward him. He laid his cheek against her hair.
"What is it?" he asked quietly.
"Do you write about me?" she asked. He nodded. "What kinds of things do you write?"
"The same sorts of things as the other Kings," he said. "What you love about your new life, what you hate."
"What do I love?" she wondered.
"It hasn't been very long," he answered, "but I think you love coming with me to my workroom."
Kate thought about that. As the realm's greatest magician, the goblin King worked magic all the time, whether he was healing illness, supporting building projects, or making sure the correct weather occurred. Sitting on her high stool, Kate watched him preparing and mixing things, and he showed her odd bits of magic as he studied and practiced. She enjoyed the magic; it was one of the things she was starting to appreciate about her unusual husband. The workroom was like a refuge to her. It was almost the only place in the entire kingdom where no one was watching her.
"I do love the workroom," she said softly. "What do I hate about my new life?"
"Being locked in," he answered. "Being stared at, being teased."
"If you know I hate being teased," she asked, "why do you alway do it?"
"Because that's one of the things about your new life that I love," he chuckled. That made her smile. "And I write about the milestones that the Kings look for their wives to pass. The first time you spoke to me--that was when you met me. The first time you called me by name--that was the day after you came here. The first time you smiled at me--that was a week after you came here, but the first time you smiled because you were really glad to see me--that was only a month ago. The first time you were happy when you woke up in the morning, full of plans you wanted to accomplish. . ." He fell silent.
"When was that?" Kate wanted to know.
"That one hasn't happened yet," he admitted. "Maybe tomorrow."

It's a surprising and lovely story and I recommend it for an evening autumn read.
Links
Books and Other Thoughts Review
Miss Erin Interview
Someone's Read it Already Review
The Shady Glade Review