Close Kin by Clare B. Dunkle 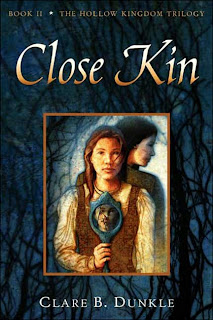 Close Kin is the second book in Clare B. Dunkle's Hollow Kingdom trilogy. It takes place around five years after The Hollow Kingdom and follows Kate's younger sister Emily. Or at least it seems to. Where The Hollow Kingdom stuck pretty closely to Kate's story, Close Kin jumps around a fair bit, splitting its time three different ways as it traces the paths of Emily, her friend and would-be suitor Seylin, and an extremely unhappy elf named Sable.

When Emily fails to take Seylin's romantic advances seriously, half goblin/half elf Seylin informs the Goblin King he is leaving to search out his other heritage and see if he can find any elves who managed to survive the last goblin harrowing. He does, in fact, come across a rather feral group of elves but, having suffered much in the name of mere survival, they are barely recognizable as the beautiful, carefree creatures Seylin dreamt of. Among this group is a young woman named Sable who, to avoid being forced into an unwanted marriage, sliced her perfect face to ribbons and who now occupies a position lower than slave. Meanwhile, once Emily finds out Seylin has gone for good she immediately sets out on a quest of her own to bring the poor boy back home and attempt to sort out her feelings for him. Most likely in that order. All of this is, naturally, being overseen by the affectionate, if somewhat insufferably know-it-all, Marak.
This book suffered from a fairly uneven approach to the telling of the story. The narrative jumped from Seylin, to Emily, to Sable sometimes within the space of a few sentences and it was a bit jarring to try to figure out whose perspective I was getting from moment to moment. I was also not as enamored of Emily as I was of her sister Kate in the first book, which made it a bit difficult to really care whether or not she set herself straight and found her way to happiness. Sable, on the other hand, I liked quite a bit and it was both painful and comforting to watch her learn to trust others for probably the first time in her dismal life, and to accept that some helping hands are extended in precisely the spirit of kindness they claim to be. My favorite scenes were any scenes Marak was in and he continues to be my favorite thing about these books. It was good to see that he and Kate were well and happy and as suited to each other as I thought they were. I look forward to the final volume in the Hollow Kingdom trilogy.
Links
A Chair, A Fireplace & A Tea Cozy Review
read_warbler Review
Someone's Read it Already Review
The Thunder Child Review