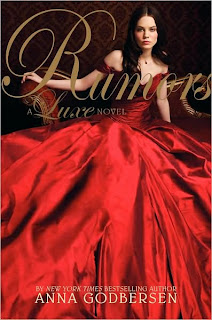 Well, everyone's in love with the one person they can't have and no one seems to be able to communicate their woe to anyone who could help. Must be Tuesday in Luxeland. Rumors is the second volume in the Luxe series and, as the deep red dress and haughty gaze of the cover model suggest, things are just getting worse and worse for our crew of Manhattan debutantes/bachelors/scheming underlings. I checked this copy out from the library and the girl at the checkout desk smiled knowingly and said, "I liked this one." I smiled and said, "I just finished The Luxe." Her grin got bigger. "I liked this one much better," she said. So. There you go. I was beginning to get the impression that lovers of The Luxe fell into two categories: even bigger lovers or big time haters of Rumors. I was interested to see which category I fell into (if any).
So everyone thinks Elizabeth Holland is dead. And pretty soon (oh, let's go ahead and say it) shockingly soon, everyone thinks Henry Schoonmaker should just say enough with the mourning and go ahead and marry Penelope Hayes since it is clear they were Meant To Be. What with the being rich and hot and whatnot. But then Elizabeth Holland is not actually dead, is she? And Henry is not actually in love with Penelope, is he? Meanwhile, Lina is masquerading about as a mining heiress from Utah (LOL), Penelope is advancing on Henry like a post-coital black widow, and the weight of the world rests squarely on Diana's little shoulders as she is the one who is now expected to make a most advantageous marriage to save the family name. Just not the advantageous marriage she'd like to make.
I liked this one. Liked it just as much as the first one, in fact. I continue to enjoy Diana and Henry and what's going on there. I continue to hate Penelope unreservedly and feel almost unbearably embarrassed for Lina around the clock. Although I do wonder about Tristan. As I was never a fan of the whole Elizabeth and Will thing, I was perfectly happy to have them off screen (for the most part). And I have to say, I really liked the ending. I mean it was exactly the awful thing you were expecting down to the last dewy glance. In slow motion. But then the last page was just so awesome and fierce in its way, that I'm really looking forward to reading Envy and consuming another volume of decadent treats on display.
Linkage
Bookshelves of Doom Review
Crimson Cloud Nine Review
Dear Author Review
Fyrefly's Book Blog Review
The Compulsive Reader Review
The Story Siren Review