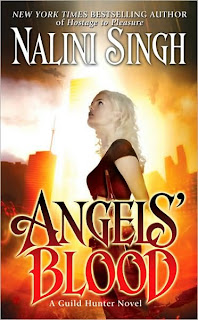 This book won out on the most likely to pull me out of my slump query. I do think it did the trick as I've read two more since and seem to be moving on. So thanks, guys. I was in dire straits. Prior to reading Angel's Blood, I was a Nalini Singh virgin. I'd heard nothing but good, but just never found myself in the mood for paranormal romance. My feelings on the genre are unsurprisingly similar to Thea's. However, this book, the first in Singh's new Guild Hunter series, is being billed as urban fantasy, which made it seem more palatable and like a good place to start. It does have several of my favorite urban fantasy characteristics. Kick-A** heroine, deadly vamps of the non-sparkly variety, strong world building, etc. But. As Thea points out, it remains a paranormal romance at heart. So if extremely heated situations make you cringe, giggle, or otherwise react unfavorably (as they do me), tread lightly here.
Elena Devereaux is a vampire hunter. She's what is known as hunter-born and so it's not just her job. It's her calling. She could no more walk away from it than she could sprout wings and fly. Elena belongs to the Hunter's Guild and, as such, is hired out to those willing to pay to have an expert hunt, capture, and/or kill rogue vampires. In this world, vampires aren't the top man on the totem pole. That honor belongs to the angels. Specifically, the archangels. Archangels rule the world and, get this, they create vampires. Who are then at their beck and call for at least a hundred years of servitude. The vampires are pretty much evil incarnate, but interestingly enough, the angels are not their polar opposites, i.e. paragons of virtue and goodness. In fact, they're sort of outside the whole good vs. evil spectrum. They run the show. They use who and what they need to to keep the vampires and humans in line and, if you value your life, you stay out of their way. Life spices up for Elena when Raphael, the Archangel of New York, enlists her services to hunt down a rogue Archangel who has done the unthinkable and become a vampire himself.
Here's the thing about Angel's Blood. It grew on me more after I finished it than it did while I was actually reading it. While I was reading it I spent a fair bit of time on the fence. Since finishing, I've found myself thinking about it throughout the day, wondering what will happen next and what the characters I particularly liked are getting up to in my absence. That's a pretty good sign, after the fact, I have to say. I had two main issues with the story, the romance and the backstory. I love me a good antihero so Raphael was right up my alley. So much so that I wanted his gradual transformation to something resembling something human to be even more gradual so that I could savor the process. And while I'm a big fan of protracted tension between the two main characters, this one tended heavily toward the sexual variety and I tend to like mine a little more cerebral. I kept wishing Elena and Raphael would wrangle a little more over the differences in their species and background and a little less over their mutual desire to jump the other's bones. Similarly I liked Elena, but I really wanted more on her backstory to push that like over to love. There are all kinds of hints at a dark past and I felt like a little more reveal earlier would come in handy sympathizing with her position in the present and understanding where she's coming from. That said, I still think this was a good place to start and I'm glad I read it. I'll be picking up the sequel to find out what happens to Elena and Raphael (and Ilium and Dmitri--love those two).