A Poisoned Season by Tasha Alexander 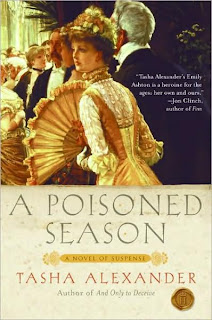 This second installment in the Lady Emily Ashton mystery series definitely exceeded my expectations. I ended up rather underwhelmed by the first book. Nevertheless, I was willing to move forward, hoping things would pick up substantially in the second. And by "things" I mean plotline, character development, chemistry between principals...pretty much the whole shebang. Good news is--they did. Quite a bit, in fact. And I'm still trying to decide whether I adjusted to the world and writing style or if they gussied up a bit. Either way A Poisoned Season  was a very enjoyable read.
Emily leaves her beloved Greece reluctantly, returning home to England for the dreaded Season. Now that she's a couple of years into her widowhood, Emily couldn't possibly care less about the endless winings and dinings, myriad marriage brokerings, and insipid social maneuverings that consume the London aristocracy for months on end. The string of cards and parties is spiced up a bit, however, by a series of burglaries--all of them items once owned by the late Marie Antoinette. When her friend Cecile's diamond earrings are stolen from Emily's own home, she becomes interested in investigating. Matters become a little more personal when the thief reveals a tendresse for Emily herself, stealing in and out of her home at will, leaving love letters and fragments of poems penned in ancient Greek. Meanwhile, Margaret has taken up with a duke, Colin is involved investigating a pretender to the defunct throne of France, and Emily's mother is determined to see Emily married again before the Season's end.
I thought things came together much more seamlessly in this story than in the first. Emily is much more sure of herself and less and less interested in what others think of her. It was a pleasure to watch her flaunt stuffy society matrons and their catty gossip in favor of learning Greek,  investigating crime, and deepening her friendship with the ever-openminded agent of the crown--Colin Hargreaves. I like how Colin never once forces Emily to do anything. I like how Emily very sensibly waits to make any permanent changes to her life before she knows her own mind on the matter. Where And Only to Deceive made me want to pull out my copy of The Iliad and settle in, A Poisoned Season sent me into a French Revolution phase, digging out my battered A Tale of Two Cities, as the mystery centers around the exiled French royal family, the life of Marie Antoinette, and the political machinations of the beleaguered Republic. This one had a delicious ending and left me eager for the next one.