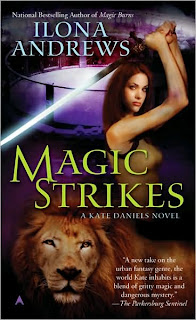 As you know, I read a lot of urban fantasy. I love the supers, the gritty cities, the strong women, and (in my favorites) the dry sense of humor. And though there are a ton of UF series out there, relatively few of them make it to the upper echelon for me. Patricia Briggs' Mercy Thompson series sits comfortably in the #1 spot. I put Blood Bound down and it was all over. I've got the Mercy's Garage shirt proclaiming my fangirl status. Exactly a year ago I read the first two Kate Daniels books. I enjoyed Magic Bites just fine and Magic Burns even more. But I'm telling you this third volume is the one. I went in with very high expectations and still I was taken by surprise at just how good it was.
Magic Strikes takes place four months after the events of Magic Burns. For four months, Kate has been learning the ropes at her new job with the Order of Knights of Merciful Aid. For four months, she's been supporting Julie--the lost young girl she took under her wing--at a boarding school outside the city. And for four months, she's been doggedly avoiding the Pack and the powerful Beast Lord Curran, who seems to think she ought to come at his beck and call. Her efforts to cruise under the supernatural heavyweights' radar stall when her sometime client Saiman calls her claiming he's holding a werewolf who broke into his apartment. Kate has a soft spot for the young werewolf in question and, in order to spare him Curran's wrath, she agrees to do a favor for Saiman in return for Derek's quiet release. The favor turns out to be more than she bargained for as Saiman draws her into the turmoil that is the Midnight Games--an extremely private, extremely illegal paranormal fight club. When Derek ends up in a coma after infiltrating the games and Curran's chief of security simultaneously goes rogue, Kate gives up any pretence of disinterest and races against the clock to save her friends and exact revenge on Derek's attackers.
I continue to love the subtle humor in this series. By the third book I'm utterly invested in these characters and the complicated give and take of their relationships that so perfectly mirror the ebb and flow of magic and technology in Ilona Andrews' Atlanta. This scene in particular had me snickering with appreciation:

I got out four plates, found silverware, and set the table. Doolittle put a glass of iced tea in front of me. I tasted it. It had so much sugar, if you put a spoon into it, it would stand up all by itself.
Jim put a slice on my plate. When I made Beef Wellington, it looked good. His looked perfect.
Brenna sat next to me. "Sorry about the thigh."
It took me a second to connect the stinging bite on my leg to the quiet woman next to me. "No problem. Sorry about the needle."
The scar on her throat had faded, but a thin gray line was still there. "It's okay," she said. "I've had silver in me before."
"Where is everybody else?" I asked.
Nobody answered. Chatty Cathys, the shapeshifters.
I cut into my Beef Wellington and put a small piece in my mouth. It tasted like heaven. Jim cut his meat with the precision of a surgeon.
"Curran called."
The three shapeshifters around me stopped breathing for a moment.
"I thought I'd mention it before you started eating. I didn't want you to choke."
"He say anything?" Jim asked.
"You have three days to turn yourself in." I imitated Curran's voice. "After that he'll have to find you. And he doesn't want to find you."
"Anything else?"
"He mostly cussed after that. I told him you and I were having a hot roll in the hay and he was interrupting."
Tea came out of Brenna's nose.
Jim struggled with it for a long moment. "I wish you hadn't done that."

I love Kate's motivations in this installment. She's under my skin at this point and she absolutely rocks every page of this action-packed ride. She busts her butt all day long and into the night for days on end trying to manage the supernatural community at large, keep her gradually growing group of friends alive, and keep herself from attracting the attention of anyone too powerful or too in the know. Anyone who, when presented with the reality of who she is, would not be able to go on overlooking her. Meanwhile, she and Curran butt heads continually and, as they spar (physically and verbally), we are treated to a welcome glimpse into their individual pasts. I was hoping for some insight into Kate's history and we get even more than I hoped. (It's gripping, by the way)! But what I wasn't expecting was some revealing backstory on Curran's rise to power in the city and what makes his Furry Majesty tick. The best part, though, is how these insights lead them to treat each other with a bit more care. Sometimes this extra caution goes unvoiced as these two unbelievably strong people are not necessarily built to give up any ground at all. But it is nevertheless there. And it serves to bring the reader that much closer to them and their struggles. Also, the fighting at the Midnight Games was awesome. Freaking awesome. This story built up to an incredible climax and I was riveted the entire time. Really. If you haven't given this series a shot yet, run out and get them now. This is urban fantasy at its most entertaining, at its very best. Magic Strikes knocked my socks off.
Linkage
Book Love Review
Ciaralira Review
Darque Review
Dear Author Review
Janicu Review
Literary Escapism Review
The Book Smugglers Review