Ballad: a Gathering of Faerie by Maggie Stiefvater 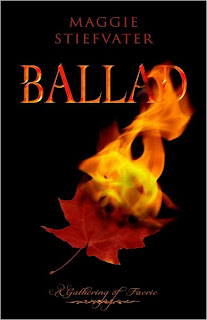 And right on the heels of Shiver comes Ballad--the sequel (perhaps companion novel would be a better term) to Lament. In a shift similar to the one in between Melissa Marr's Wicked Lovely and Ink Exchange, Ballad switches narrators from Dee to her best friend James Morgan. And James, like Marr's Leslie, is in rather a lot of trouble. The story follows his struggle to recover from narrowly escaping death at the hands of homicidal faeries in order to protect Dee, as well as his stuttering attempts to deal with life after telling his best friend he's in love with her and having her not return the sentiment.
Even though James doesn't care much what happens to himself, he does still care about Dee (almost against his will). And so he follows her to Thornking-Ash Conservatory, enrolling in a school full of gifted musicians guaranteed to annoy the crap out of him, in order to be near her. And despite the fact that he's a piper and they have no program to suit his level of expertise. But Dee barely talks to him. And when she does their brief conversations are hideously awkward, full of meaningless banter and superficial smiles. Meanwhile the faeries are far from finished meddling in James' life. On his way back to school after a spectacularly failed piping lesson, James runs into an unusual faery named Nuala. Unbeknownst to James, Nuala is a faery muse who gifts her chosen humans with unmatched artistic ability only to feed on their souls until they burn up and die. Nuala has been without a human for too long and is intent on claiming James. All she needs is an invitation...
Ballad is a love letter to James fans. Period. If you liked yon lanky, loquacious lad before you will fall head over heels in love with him in this installment. Witty repartee and quirky t-shirts aside, Ballad brings us infinitely farther into James' mind than the brief but enticing glimpse we got in Lament. And what's there is richer and more painful than one might expect from his humorous exterior. The sort of deal Nuala offers is the height of temptation for this troubled young man who is obsessed with music and excellence and who is so very alone. Ballad is a tighter story than its predecessor and that fact was clear from page one. James and the cadre of disciples he gathers round him like a cloak at Thornking-Ash fairly leap off the page at you until all you want in life is to be chummy and sarcastic with them all day long. Nuala is a different story. The chapters alternate between James and Nuala's point of view (with a few text messages from Dee interspersed here and there). And as she gets to know and appreciate James, I came to like her more and more. But Nuala didn't ever quite come into focus for me as much as James did. Of course, he's a hard act to follow. For as he edges closer and closer to completely unravelling, his witty facade gets sharper, more honed, more irresistable. Both to the reader and the psychic vampire obsessed with him. I laughed and gasped and wrung my hands with worry for this boy. And I miss him now that it's over. So, uh, Maggie--any chance there's a third book rattling around in there somewhere?
Ballad is due out October 1st.