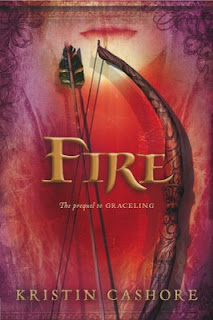 I seem to be in the reading sequels to my favorite books of last year mode. For the record--a freaking awesome mode to be in. Graceling was one of my very favorite reads of 2008 and the year's best YA I would venture to say. And before you get all up in arms, let me assure you I enjoyed The Hunger Games as much as the next person. But Graceling was just the one, you know? And I have this feeling that Kristin Cashore is something special. I was positively thrumming with anticipation when I heard she had a second book to follow. And it's the one I chose to take home with me on the plane ride home from BEA. Fire is, in point of fact, a prequel to Graceling and takes place 30 years or so prior to Katsa and Poe's story. It is also set in an entirely different land, though definitely in the same world, and (as I am sure you have already heard) a certain terrifyingly familiar character from Graceling makes an appearance in Fire. Otherwise, it is its own story and it stands completely on its own feet.
Fire is a monster. A human monster. And the last of her kind. In her homeland, the Dells, there are all manner of monsters from lizards and mosquitoes to leopards and raptors. But they all have one thing in common--their incomparable beauty. These creatures come in a gorgeous riot of color and texture and are so beautiful they literally impede rational thought in the humans they come into contact with. With the ability to control the minds of those around them, they inspire an uncomfortable (at times deadly) mixture of fear, hatred, and absolute longing in the people of the Dells. And no one is more hated or sought after than Fire. Her father was King Nax's most trusted advisor and closest friend. He was also the one responsible for the king's untimely death and for the current chaotic state of the realm. When Fire's service is requested on behalf of the young King Nash and his brother and war commander Brigan, Fire is thrust out of her quiet life and into a mounting war. Forced to reconcile her questionable abilites with her own demanding conscience, she is immediately caught between right and wrong, a dark past and uncertain present, and a pair of brothers determined to win at all costs.
This book made short work of me. There was just so much hope inside me wrapped around how good it would be and when it turned out to be approximately ten times better than all that wrapped up hope....well....I was a goner. I looked forward all day long to the moment I could crawl back in bed and read more about the Dells and Fire and Brigan and Archer. And the list goes on. These characters are breathtakingly real and the way the gorgeous, understated writing tugs and pulls and builds a complex and lovely world around them makes the whole package irresistable. Best of all, Fire herself struck a chord deep within me and I held my breath as I watched her move through her world, worried she wouldn't meet with enough care, hoping someone in the messy throng of plotting, planning, warring kings and soldiers would recognize her for what she was. Like Katsa before her, she is so very strong, an outcast her entire life, and yet she never turns her back on those who need her. Even when they have no idea how desperately they do. Even when she herself is afraid. Fire is, wait for it, even better than its predecessor. It's subtle and thoughtful and throbbing with genuine emotion--three qualities I often find lacking in my reading. It is, without a doubt, the most difficult of combinations to achieve, but when the right note is struck....magic.
Fire is due to hit shelves October 5th.
Linkage
E. M. Reads Review
Eva's Book Addiction Review
In the Booley House Review
Reading Rocks Review
The Book Nest Review