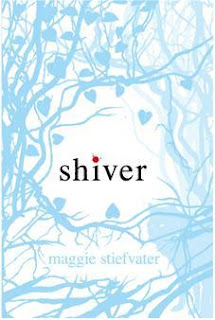 As I was packing for BEA, I said to DH, "Oh, and I still have to pick out which books I'm taking." He let out a bark of laughter and put his hand on my shoulder pityingly. "You do realize you'll be coming home with a box of books, right? You do not need to take books to the Book Expo. They will come to you," he said in soothing tones. And so after much debate, I allowed myself one book to get me there. There really wasn't any doubt as to which book it would be. A copy of Shiver had shown up in my mailbox shortly before and I was fairly itching to dive in.
At the edge of the woods in Mercy Falls, Grace lives alone. Oh, her parents are there but nigh unto incapable. Wrapped up in themselves and their careers, they are aggravatingly oblivious, managing to check in with their seventeen-year-old daughter in the unlikely event it occurs to them. And since she's never known any different, and they are her parents, the eminently practical Grace made her peace with it a long time ago. She doesn't weep over lost chances. She just makes dinner, does her homework, and quietly obsesses about the wolves in the woods. Yeah, Grace has one thing that consumes her. One messy, inexplicable fact in her otherwise staid existence. When she was a child she was mauled by wolves and left for dead. Somehow she survived and, ever since, a solitary wolf watches her from the shadows. Every winter, like clockwork, he skirts the edges of her home like a silent guardian, only to disappear again when summer arrives and temperatures rise. His presence is the one constant in her life. Until someone else is mauled by wolves. Until a boy named Sam turns up on her back porch. A boy with strangely familiar yellow eyes. And the world begins to change.
I picked the right book to take with me. As soon as I found out Maggie Stiefvater was writing a new series to do with werewolves, I began counting down the days. Lament was on my Best of 2008 list, and I was relying on the mysteriously titled Shiver to tide me over until the release of the sequel Ballad. And honestly the first thought I had after finishing was that it was perfectly titled because Grace and Sam's story sends shivers down your spine repeatedly. The second thought was how the characters surprised me--in a good way. I don't know exactly what I was expecting. Probably something along the lines of Dee and Luke in Lament, all urgent and angsty and dangerous as hell. But Grace and Sam are an entirely different breed. She is cool and methodical and even and I warmed up to her as I got to know her better. He is warm and thoughtful and artistic and I liked him right from the start. On the paranormal scale, this one falls much heavier on the realistic end of the spectrum. There's even a scientific (sort of) explanation for the werewolves' condition, with the result that the emphasis remains on the characters themselves. They and their storyline are so tied to the seasons, to the minutest fall in temperature, that I discovered I was responding to them in the same way. I loved how contained they both were. Maggie Stiefvater has managed to craft an intensely involving, desperate love story without the cliche teen stupidity a la Romeo & Juliet. Quite the feat. The descriptions are lovely, the young protagonists sympathetic, and there's a scene in a candy shop that will leave you absolutely salivating. I dare you to read that one just once.
And now for the giveaway. Because I enjoyed it so much (and because I was able to snag an extra copy at BEA), I'm giving away a signed ARC of Shiver to one commenter. All you have to do is tell me the last book you read that literally sent shivers down your spine and you'll be entered. This contest is open to U.S. and Canada residents only. Open till Sunday the 14th at midnight and I'll announce the winner on Monday.
Linkage
thebookbind review
The Well-Read Child Review
The Reading Zone Review