The Actor and the Housewife by Shannon Hale 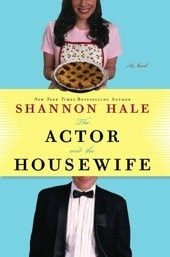 I'm going to warn you upfront that I had an extreme reaction to this book. An extreme and unexpected reaction. Just ask DH. He had to listen to me rant ad nauseam until I'd exorcised the demons enough to move on. The thing is I haven't reacted so strongly to a book for quite some time and it took me a bit by surprise. Oh, well, who are we kidding? It threw me for one hell of a loop and I had an extremelyhard time shaking it off. Despite all this I'm going to try to continue my tradition of spoiler-free reviews and, as a result, won't be able to tell you the precise reasons why I reacted the way I did. I won't be able to go into excruciating detail explaining exactly how and when my emotions bounced back and forth. But let's be honest. That's probably for the best. So.

Becky Jack is a Mormon housewife living in Layton, Utah, pregnant with her fourth child. She has just sold a screenplay to a film agency in LA and is meeting them there to sign the contract, when in walks Felix Callahan--sexy British star of Becky's favorite romantic comedies. The two of them clash right from the start and, despite their visible disdain for one another (and the fact that Felix has long been Becky's movie star crush), they find themselves staying at the same hotel and eating dinner together that night. Becky returns to Utah sure it was some fluke, a fun story to tell the fam, and that she'll never see Felix again. Au contraire, Becky. Turns out Felix hasn't been able to get their abrasive encounter out of his head and the next time he has a layover in Salt Lake City, he turns up to see her and figure out what the deal is. From there these two unlikely characters become the very best of friends. Talk on the phone daily, stay up all night long talking, drop everything to jet off to New York at a moment's notice kind of BFFs. As you might expect, a whole host of factors get in the way of their "friendship," including at times concerned/jealous spouses, their different faiths (or rather Becky's strict one and Felix's utter lack of one), their diametrically opposed lifestyles, etc. Self-proclaimed platonic lovers, these two weather the small and large storms of life as their friendship and story stretches out over a decade and more.
I'll preface my comments by saying I have read all of Shannon Hale's YA books. I love her Books of Bayern and thought her first adult novel Austenland was a fun, light romp for Austen fans. I expected to like this book just fine. I knew it would be quirky and different and fun. I certainly didn't go in expecting a happy ending because, well, given the subject matter who would? I laughed my way through the first 100 pages because any scene Becky and Felix share sparkles. I even cried. Once. At a scene about 80 pages in or so that was just so real (and a little close to home) it struck me in the gut. However, I felt that the next 250 pages were an uneven roller coaster ride of conflicting emotions, increasingly hard-to-swallow turns of event, and very inconsistent characterizations. Every aspect of the story felt so deliberate and pre-planned that it got in the way of my reading experience. It was strangely a prime example of too much telling and not enough showing. The narrator and Becky herself told me over and over (and over again) how much she was in love with her solid-as-a-brick-wall husband, how little Felix meant to her compared to Mike, how she would never do anything to jeopardize her marriage, etc. Her actions spoke differently. The actual depiction of her marriage was lukewarm at best. The rock Mike was too vague an image to grasp onto. Next to Felix he was a mere smudge. Felix clearly meant an inexplicable amount to Becky. And vice versa. These two cannot function properly without each other. They will always be returning to each other. The crystal clear, most evocative, and resonant depictions were of Becky and Felix. And it was simply too difficult for me to buy everything Becky was saying in the face of what she was showing me page after page. The Actor and the Housewife is an exploration of whether or not married men and women can be friends and just friends. The answer is, of course, yes. But that is not what Becky and Felix are. I know that's what they're supposed to be. But they're not. They are intimates. They are soulmates. That is the way every encounter, ever glance, every touch is characterized. The intent seemed to be some sort of Humphrey Bogart-Ingrid Bergman-Paul Henreid triangle a la Casablanca. The result was a Rock Hudson-Doris Day-Tony Randall anti-triangle a la Pillow Talk. And by the time the overwrought, rushed ending arrived I felt so completely jerked around I was unable to deal with the melodrama a moment longer.
I'm really sorry it ended this way, The Actor and the Housewife. I know you've gotten a lot of positive reviews and it's quite possible it's me and not you. In case that is true I'm including a rather longer list of other reviews than is my norm. So readers can decide for themselves. As for you and me, I think it's time we start seeing other people.