The Laurentine Spy by Emily Gee 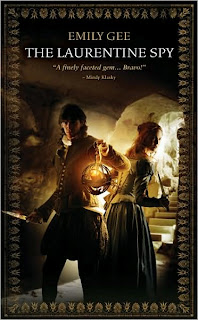 Thanks go to Ana of The Book Smugglers for recommending this lovely little book. It was her review that first brought it to my attention a couple months back and sparked my interest. I picked it up at the bookstore shortly after, brought it home, and then promptly set it on the nightstand stack to marinate for awhile. I looked at it speculatively from time to time but other books kept nosing in and getting in the way. Then when I suddenly needed something incredibly engrossing about characters who elicited my sympathy to pull me out of my post-The Actor and the Housewife funk, there it was. On top of the stack with its pretty cover and its hinting at a sort of irresistable blend of fantasy, intrigue, romance oh my!
Deep in the bowels of the Corhonase citadel, among catecombs and crypts and crumbling columns, three cloaked and hooded personages meet in secret. They utter their passwords to the mysterious Guardian and enter:

Her shoulders brushed rock on either side as she slipped through the narrow opening. The block of stone swung quietly back into place, shutting her in stale darkness.
She was no longer alone. She saw nothing, heard nothing--but she knew.
Saliel drew her knife. She gripped it tightly. "I saw three rings around the moon tonight."
"I saw none."
Saliel relaxed at the familiar voice. She sheathed her knife.
"You're late."
"Yes." She'd left the ball as early as she dared, but it had taken the maid long minutes to unlace the gown, to unpin her hair and replait it in a single long braid, to bring hot water to wash her face and warm honeyed milk to drink. "I apologize."

Known to each other only as One, Two, and Three, by day these three spies masquerade as nobles and servant in an enemy court, while by night they plot to steal top-secret code books on behalf of their homeland of Laurent. Different spies rotate through Corhona and there have always been a One and a Two. A noble and a servant. But now, for the first time, there is a Three. A woman. Saliel is Three and it is her job to stay close to the women of court, to the Prince's Consort, and feed her fellow spies and their Guardian any information she can glean about military movements, plots, and maneuvers. It is Saliel's dream to earn enough money to quit espionage and settle down in a solitary cottage by the sea and never have nightmares of her dark past or her danger-fraught present. Though they have no idea just who the other masquerades as during the day, One and Three develop a tenuous bond forged of mutual respect, curiosity, and a desire to protect the other from harm. But when the prince brings in a professional Spycatcher, that bond is stretched to the breaking point as Athan and Saliel are unwittingly pitted against one another, forced to tiptoe through their days, terrified of being caught, and uncertain as to whether or not they will ever escape Corhona alive.
I devoured The Laurentine Spy. It was precisely what I needed--a really emotionally involving, heart-thumpingly exciting yarn. Within three pages, Emily Gee had me completely committed to these two characters and their secret-shrouded mission. The entire premise is a recipe for success: two spies who have never seen each other's faces, who interact with each other daily without knowing it, and who spend whatever available mental energy they have worrying about the other. Worrying and wondering. The suspense is palpable throughout the novel and I found myself glued to the page, aching to find out what turn they would take next, which corridor they would follow, and who would be lying in wait around the corner. And, of course, I was on pins and needles waiting to see if they would ever meet in person, face to face, and utter aloud the thoughts they've had circling in their heads for months on end. My heart was in my throat for the majority of the story and I rooted very hard for Saliel and Athan as they played out their assigned roles, despite living in a near constant state of numb terror, despite having no one to whisper their fears to, and despite the knot of secrets threatening their lives. A cracking good read recommended for fans of Sharon Shinn, Susan Dexter, and Moira J. Moore. I will definitely be picking up Emily Gee's first novel--Thief With No Shadow.
Linkage
Beware the Man of One Book Review
Fantasy Book Critic Review
Janicu's Book Blog Review
Lusty Reader Review
The Book Smugglers Review