Retro Friday Review: Seventeen Against the Dealer by Cynthia Voigt 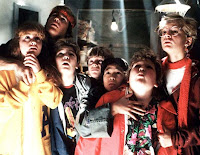 I'm pretty sure my mom handed me a copy of Dicey's Song during one of our summer reading list deals. Surely you're familiar with the concept. I read so many of the books on the list and she, in turn, gave me some sort of reward. You see this was back in the pre-Chronicles of Narnia phase in my life. The early days when I would rather be rolling down hills or jumping on beds than reading during the summer. Frankly, it's hard for me to look back now and remember such a time even existed. I'm pretty sure it was a list from the local library and that most of the books on it were award winners of some sort. As Dicey's Song was the Newbery winner for 1983, it was definitely on the list. Looking back I'm actually glad I didn't pick it up that summer. Instead I held out long enough to have fallen in love with reading a year or two later as well as discover that it was actually the second book in a series of seven. The Tillerman Cycle follows the four Tillerman kids on their journey in search of home. The entire series is spectacular and covers quite a span of years, at times following close family friends and, in one instance, a relative before returning to the original four in the concluding volume--Seventeen Against the Dealer. This final book is the one I'd like to focus on today because I think it hasn't gotten the attention it deserves. I'm still unable to pick my favorite of the series. Dicey's Song is an absolute classic and A Solitary Blue is breathtaking (and won the Newbery Honor a year later). But Seventeen Against the Dealer grips my heart every time I re-read it and is an all too rare example of an author managing to end a long-ish series flawlessly.

Dicey is now 21 years old. Having raised her three siblings in almost every sense of the word, she is now ready for that independence she's been longing for for so long. James is dealing with colleges and scholarships. Maybeth is taking care of Gram and keeping the house together. Sammy is playing enough tennis for four teenage boys. And Jeff is away at school. The perfect time for Dicey to stretch her wings and open that boat business she's always wanted to. After sinking every penny she ever earned into setting up shop and accumulating the necessary tools, Dicey spends all day every day working to pay her rent, with precious few moments leftover to craft that perfect boat she has in her head. In fact, Dicey spends the majority of her time in her own head now. She's always been introverted but she takes it to a new level here, unable to really bring anything else into focus. In the meantime, several important things go by the wayside. Her siblings need her but fear to intrude. Jeff tries to maintain their relationship, give her space at the same time, and not lose himself in the force of Dicey's indomitable will. After her shop is broken into, Dicey reluctantly admits she needs help and takes in a drifter by the name of Cisco Kidd who may be just what he says he is. Or he may turn out to be much, much more than that.
A favorite excerpt:

Jeff had finished the song. Before he could start another, and before Dicey could answer that question, Mina called across to him, "You know what I want to hear? A love song."
"What kind of love song?" Jeff asked. "True love? Love betrayed? Love lost, faithless love, or false love?"
"Let's go for true love," Mina laughed. "Never mind the odds."
Jeff looked at Maybeth, who nodded at him. He started to play a song Dicey had never heard before, but before she could wonder, Maybeth was singing. "'The first time ever I saw your face,'." Maybeth sang to a guitar accompaniment as single and clear as the golden voice Maybeth cast out around the room, where--like the animated drawing of a ribbon--it curled around and around everyone, then tied itself into a perfect bow. The song brought tears into Mina's eyes, Dicey saw, and had Phil Milson sitting so still, watching and listening so hard, that you could almost see the way the beating of his heart pushed the blood up into his cheeks, and turned them pink.
Maybeth sang, "'I thought the sun rose in your eyes.'" On the last word, her voice rose up a third and then down and around, a turning of melodic line as smooth as a curving ribbon. "'And the moon, and the stars,'" she sang on, "'were the gifts you gave to the dark and the endless skies...'"
Dicey couldn't remember the first time ever she saw Jeff's face. Jeff's gray eyes, dazed with the song, were on Maybeth. Then he turned to look at Dicey, as if he'd known she was looking at him, and she knew that he did remember the first time he saw her. She thought she ought to be able to remember, but she couldn't, not the time. The season, that she could, but she ought to be able to do better than that. Then she stopped thinking and let the song wind itself around her and pull her into the room to sit on the floor beside him.
All the long afternoon they sang, and talked, and ate, and Dicey didn't think about her boats, the ones she was working on or the ones she was dreaming about, except once, when they came to the line in Momma's old song that said "bring me a boat will carry two." She could see that boat then, as real as if she had already built it.

Voigt's writing wraps itself around me just the way the song wraps around Dicey. I never want to leave. By book seven, I love this family and these characters so much they feel as though they're mine. There' s just something about the Tillermans that' s impossible not to admire. And Dicey herself has long been one of my most beloved characters in all of literature. When I was 12 I wanted to be her so much it hurt. Truth be told, I still want to be her. She tackles her problems with nothing but her own two hands and an inability to fail. She is the definition of tenacity. To a fault sometimes. But she knows what's important and she takes care of her own. That's why it's so beautiful to find this last story was hers alone. And to find that after everything she's been through, she's so far from perfect. She still has things to learn about life and loved ones and not taking any of it for granted. This story is so real in its depiction of the painful entrance to adulthood, the monotonous grind of daily labor, and the process of learning how to love someone the way they need to (and ought to) be loved. It takes my breath away every time. Seventeen Against the Dealer stands on its own, but don't cheat yourself and start with the last. Read all seven books for the full experience. If you're short on time you could probably get by with just the three (Dicey's Song, A Solitary Blue, and this one). But only if you're short...
Retro Friday Round-Up
Bookworm Nation reviews The Face on the Milk Carton