Going Too Far by Jennifer Echols 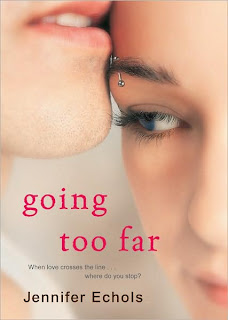 I picked up Jennifer Echols' Going Too Far on the recommendation of the Ana-half of The Book Smugglers. Ana is good peeps and pretty much never steers me wrong. She said she stayed up into the wee hours of the night reading this one and what do ya know? I did, too! It's just that it was my birthday eve and I was feeling like being incredibly cozy and wanted something sweet and absorbing. This book is both. I read it in one sitting and pretty much had to know what happened before I could sleep. The funny thing was my dreams had an interesting musical score behind them that night. Full of songs about love and loss. Particularly "Re: Stacks" by Bon Iver. Over and over again in my head, this one seemed to fit Meg and John so well.
Re: Stacks - Bon Iver
Stuck in Nowhere, Alabama, Meg MacPherson is counting down the hours until she can move away to college. And it doesn't even matter that she's only going just a few miles down the road to Birmingham. She'll still be away from her hometown, away from her parents, and away from her thankless (and payless) job at their 24-hour breakfast greasy spoon--Eggstra! Eggstra! *snort* For the last few years Meg has comfortably occupied the position of town Bad Girl, complete with rapidly changing hair color (currently blue) and revolving door of lousy boyfriends (seriously, her latest makes Charlie Sheen look like a real catch). One night up on the railroad bridge, Meg and three compatriots have the misfortune to be caught, drunk and disorderly, by the local cops. For their punishment, they each have to spend a week riding with one of the emergency personnel that had to come out after them that night. Meg pulls the cop who chewed her out that night--Officer After--a 19-year-old hometown boy whose only ambition in life appears to be busting the butts of errant high schoolers and who never dreams of leaving. Over the course of the next five days, Meg and Officer After learn a few things about each other that complicate both of their long-term plans.
At first these two seem like fairly straightforward stereotypes. Bad Girl meets Straight Shooter. Sparring and romance ensue. In that order. But then, just as you're prepared to get bored, things get interesting. Meg shows herself to be quite a bit more layered than initially expected. She's clearly got several hideous incidents in her past which make it, among other things, difficult to be in confined spaces. Handcuffs or prison bars, for example, assume nightmarish proportions for Meg. And she has a charming habit of voicing her thoughts and emotions. Every time she blurted out, "I am full of fear," I laughed and loved her more. Except when she really was. And had good reason to be. Then I was full of fear for her and I couldn't stop turning the pages. John is as layered as Meg, only it comes out more slowly as Meg herself discovers it. And it doesn't all come out in the right order, which is frustrating for all concerned. But they're both so likable, you'll go along for the ride. My favorite bit about this story is that in the end, when the inevitable unforgivable act occurs, Meg squares her shoulders and fixes things. She doesn't dissolve in her despair but rather has a good cry and then goes about making reparation and salvaging what she can. I always liked her, but that's when I admired her. Recommended for fans of Simone Elkeles' Perfect Chemistry, Laura Wiess' Such a Pretty Girl, and for when you're looking for a light, swallow-in-a-single-gulp read.
Linkage
About Books Review
Michelle's Reads Review
Nocturnal Review
The Book Smugglers Review
Violet Crush Review