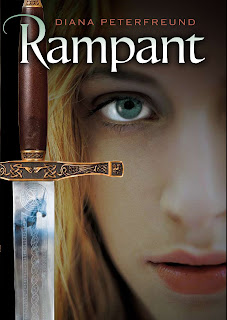 It's no secret I'm a huge fan of Diana Peterfreund's work. I discovered her Secret Society Girl series last year and, in what seemed like no time at all, it quickly became one of my very favorites. Tap & Gown--the concluding volume of the quartet--came out in May and it was a perfectly splendid end to a series I know I'm going to re-read over and over again. The problem was I went into a bit of mourning when it was over. What saved me was knowing a brand new Peterfreund book was coming out just three short months away. The first in a new series (and a YA one at that!). I let the knowledge of the rather wonderfully titled Rampant carry me through as I said my goodbyes (for now) to Amy and the whole Eli gang.
Astrid Llewelyn's mother is nuts. For the whole of her sixteen years she has raised Astrid to believe in unicorns. And not just any old sparkly, frolicking through a meadow unicorns. Rabid, slavering, gore you through the chest and tear the skin from your bones sort of unicorns. According to her mother, Astrid is descended from a long line of virgin unicorn hunters stretching all the way back to Alexander the Great. Unfortunately, no one alive has ever actually seen one so Astrid does her best to ignore her mother's ravings and get on with her life. She's got a boyfriend who's gonna take her to the prom. That's normal. He's putting a rather large amount of pressure on her to go further than she'd like, but, hey, that's normal too, right? What is not normal is when a unicorn shows up mid-makeout, gores said boyfriend, and Astrid is shipped off to a unicorn hunter training facility in a crumbling convent in Rome. As she learns more and more about the history of unicorns and their hunters, Astrid comes to find that:
1. There are other girls out there like her.
2. Italian boys are hot.
3. The story her mother told her was not entirely accurate. There is, in fact, quite a bit more to it.
I always enjoy Diana Peterfreund's light touch with words. Her prose never feels heavy or disjointed and it's a pleasure letting your mind and eyes absorb the words as they come. Rampant's strengths lie in its worldbuilding--the seamless way in which unicorn lore and legends come together to form the fabric of reality in Astrid's world. They are horrifying creatures and, when Astrid encounters the more nightmarish ones, the aftereffects include vomiting and agony. I absolutely loved how heinous they were. Along with that, the history of the hunters is layered and complex and extremely well done. I occasionally find myself tiring during exposition that covers thousands of years, wanting to get back to the action of the main plot. Not so here. The stories and bloodlines and incarnations were so varied and interesting that all I wanted was more. My reaction to Astrid herself was harder to peg. I think I was expecting her to be "different" from the very beginning, whereas all she wanted was to be normal. She spent a lot of time and energy toward that end, preferring to worry over whether or not the art major hottie likes her and not over which weapon to wield against poisonous, flesh-eating monsters. It's not that I blame her. In fact, in a book that is not short, I still found myself wishing for more time between Astrid and her fellow hunters-in-training, between Astrid and her hottie. Against the background of thousands of years, those sections felt brief. I understand why. I just wanted to get to know them all better so that I could care about them more fervently. Over time Astrid's training and abilities begin to change her in such a way that it's my opinion she'll never see this side of normal again. I, of course, take delight in that prospect and am looking forward to the sequel with much anticipation. Rampant is due out the 25th of this month.
Linkage
Karin's Book Nook Review
Presenting Lenore Review
Sharon Loves Books and Cats Review
Silvia Pi's YA Books Review