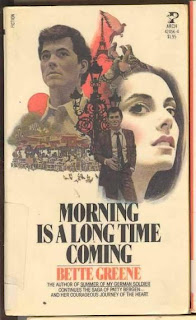 In the spirit of summer reading lists of yore, I thought I'd focus on another book that was on one of the many lists I went through. Or rather the sequel to one of those books--Morning is a Long Time Coming--the sequel to Summer of My German Soldier. Reading Summer of My German Soldier kind of wrecked my twelve-year-old self. I loved it, but man did it hurt. I was on Patty's side from the beginning and I was frankly horrified at the way her family treated her. Particularly her atrocious mother. In fact, it was probably the pains she suffered at the hands of her parents that lingered in my heart far longer than the loss of her sweet friend. I remember being outraged and bereft at the end of it, having come up hard against Patty's many injustices, both social and personal. It's a beautiful book, but man does it hurt. Fortunately, this lovely sequel went a long way toward healing that hurt. Just as it did for Patty. And every time I read it it makes me want to go to sleep and wake up in Paris.
Morning is a Long Time Coming opens six years after the events of Summer of My German Soldier. Patty is graduating from Jenkinsville High and heading to visit her grandparents in Memphis to celebrate. While there, they present her with a check for college and she begins entertaining the possibility of fulfilling her dream and traveling to Europe to find Anton's mother. Unable to set the circumstances of his death behind her, Patty longs to meet his family and explain her story to the mother of her friend. Against the wishes of her family (and the entire closeminded population of Jenkinsville), she sets sail for Europe, making a few friends on the voyage who help her come out of her shell a little and who remind her there is so much more to the world than Arkansas. In Paris, Patty meets a young photographer and English instructor name Roger who opens up another view of the world to Patty. And even as she experiences a happiness and freedom she has never known before, her obsession with Anton's death and with finding and meeting his mother rears its head, lurks in the back of her mind, pressing on her, prodding her to leave Paris and Roger for Germany and the possibilities it represents.
I love this book. It is such a simple, sweet story. And I love it as a sequel because, even set six years later, it addresses the implications of its predecessor with just as much gravity and attention as they deserve. Patty was just twelve years old when she met Anton. The fact that she has reached the legal age of adulthood has nothing on the power of the impressions that were made at that tender age. At the same time, I was proud of how strong she'd gotten in the interim. She stood up to her mother and father, she defied everyone who ever told her she was dirt and she left them in the dust and traveled to the Old World, which for her was so breathtakingly new. It's a fine line presenting a protagonist with a true obsession. And Patty was a slave to hers. But she was cognizant of it. That fact is what always strikes me about her. She knows it's killing her, dragging her under with its constant emotional assault. And yet she moves through it, trying to keep her head above water and do the right thing and accomplish what it takes to lay her ghosts to rest and move on with her life. I love her for her doggedness and her earnestness. And I love Roger for his quintessential Frenchness and for the wholehearted and compassionate way he embraces life and Patty.
A favorite passage:

Abruptly I closed my eyes against all distractions. Pursue the obsession, I commanded myself, or ditch it. Ditch it now. You can't have it both ways, nobody can. And here only an arm's reach from the American International Travel Agency is the perfect spot to jettison forever this embarrassing and impractical dream. For me to chase a ridiculous compulsion across an alien continent would be too upsetting for both my parents and my grandparents. Isn't it possible--can't I, at least, try to become the kind of daughter and granddaughter that they would like?
Sombody has got to get it through my head that Hans Christian Anderson and a few others have written fairy tales, but almost nobody has ever lived one. Please . . . please . . . before it's too late, give it up. For everybody's sake, please give it up now! Because the truth is, it doesn't make sense--not even to me!
I don't know if I can give up what I need so much. Anyway, I don't know how to become the perfect daughter and granddaughter. Wouldn't even begin to know how to conform to some idealized specifications that are locked deep within the hearts and minds of others. Even Grandmother's pattern which was carefully prepared for me with a large quantity of love doesn't come anywhere close to fitting me. She, for example, certainly didn't figure on my social ineptitude or Iris Glazer's arrogant inhospitality. Maybe we all have to learn custom tailoring for ourselves.
I opened my eyes to look again at the round polished brass of the doorknob, but what I saw was my own hand reaching out, reaching out for it. Okay, okay! So go. But don't you dare come crying back to me when things go exploding in your face. Don't you dare come crying back to me. Do you hear?
I turned; it clicked. It made a decisive sound.

Few people read beyond the first book. Many don't even know this one exists and it deserves so much more than that. Recommended for fans of Eva Ibbotson (particularly A Song for Summer) and Madeleine L'Engle's And Both Were Young.
Retro Friday Roundup
Bookworm Nation reviews Sarah, Plain and Tall by Patricia MacLachlan