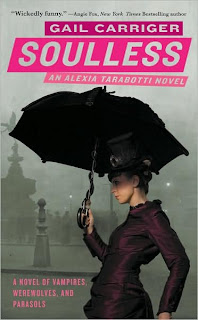 I'd seen this cover batted about the internets for awhile and I admired it at every encounter. It really is effective, I think, in giving you an accurate and enticing glimpse into the goods inside. The slant of the modern font, the steampunky parasol, the charmingly off kilter stance of the heroine. Put that together with it's killer tagline,

"A novel of vampires, werewolves, and parasols."

It was pretty much a foregone conclusion I'd be picking Soulless up. Then at BEA I happened to turn a corner and come across a delightful lady sitting at a small table at the Orbit booth. I approached and she smiled and inquired as to whether I would like some tea and shortbread. Oh, and perhaps a signed copy of her book? I nodded, completely charmed, accepted a cookie, and then caught sight of the cover of her book. It was Soulless! And the lovely lady was Gail Carriger.
Miss Alexia Tarrabotti is larger than both the stuffy Victorian social mores and the stiff stays of her corset allow. Being half Italian, well past the age of eligibility, and completely without a soul, she spends most of her time reading, chaperoning her half-sisters to a series of insipid balls, and trying to avoid embarrassing encounters with a variety of supernatural creatures roaming London these days. You see, vampires, werewolves, ghosts, the whole bit are out and about and accepted in society. Part of their makeup includes an overabundance of soul, while Alexia suffers from an utter lack. As a result, she is able to cancel out their supernatural abilites with a mere touch of her hand. Known as a preternatural, she is a rare commodity indeed and no one but a few well-placed, well-connected vampires and werewolves know what she is and what she could be used for. When she unexpectedly encounters a rogue vampire at a fancy ball, Alexia does the only sensible thing and stakes him on the spot. Enter the irascible Lord Maccon--the Scottish alpha werewolf of a local pack. On orders from the Queen herself to investigate the incident, this is not the first run-in Lord Maccon and Alexia have had. And, when Alexia expresses her determination to remain involved in the case, it is clear it will not be the last.
Fun, fun, fun. That is what this book is. I found myself completely won over by Alexia. And Lord Maccon. They're just so very thrown together and they are just so very much fun to be with. It was nice to read about a relationship full of tension and romance, but without an interfering third party or one party who persists in being intolerably stupid or thick about things. Don't get me wrong. There are misunderstandings and miscommunications and a few other mis-es. But the whole thing is so enchanting and light-hearted. And it centers on two (for lack of a better word)good people. They have their quirks and idiosyncracies, but they are also both admirable and spunky and full to the brim of life and passion and personality. Soulless spans several genres (urban fantasy, historical, steampunk, comedy of manners, romance) and it makes fun of and love to them all. Though things did grow a bit silly for me at the very end (I found myself longing for a little more gravity between the lead characters), my affection for them kept me reading. Like the title font, Alexia is quite modern in her sensibilities and she is nothing if not uncompromising. With her modernity comes a few more heated scenarios than one might expect in her situation. At the same time Ms. Carriger makes Miss Tarrabotti hyperaware of every flaw and foible. Buffeted by the disapproval and dislike of her family and society, she is skeptical of the motivations of anyone expressing admiration or interest. As a result, she longs for home and love at the same time as she holds herself aloof from those who might be interested in getting close to her. I, myself, am quite fond of her and found her very sympathetic. I look forward to Changeless--the second installment in the Parasol Protectorate series. Soulless is due out September 29th.
Linkage
Janicu's Book Blog Review
Popin's Lair Interview
Rob Will Review...