Eyes Like Stars: Theatre Illuminata, Act I by Lisa Mantchev 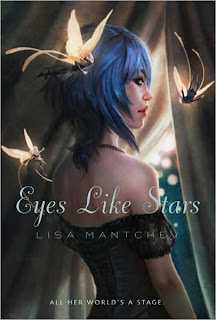 Awhile back I won an ARC of Lisa Matchev's Eyes Like Stars. I was even more excited to read it when the book arrived and I saw the tagline: Theatre Illuminata, Act I. Loved it. Love the whole title, the lush, edgy cover, and the main character's incredibly apt name--Beatrice Shakespeare Smith--known to the inhabitants of the Theatre Illuminata as Bertie. So I was happy to see Eyes Like Stars nominated for a Cybils award in the YA Scifi/Fantasy category so that I could kick my panelist reading off with a book I'd already been looking forward to reading. That it was about the stage and included numerous references to Shakespeare was icing on the cake.
Bertie lives in the Theatre Illuminata. Eighteen years ago she was left on the doorstep as a baby and taken in by the Wardrobe Mistress and adopted by nearly every denizen of this most unusual theater. You see, every character in every play ever written lives in the Theatre Illuminata. And in the Theater Manager's office there is "The Book." Spoken of in hushed tones and never really approached, "The Book" contains the script of every play ever written. Something of a charming rebel, Bertie loves her adopted home. She love sleeping in her bedroom on stage. She loves getting into mischief with her four fairy friends: Moth, Peaseblossom, Cobweb, and Mustardseed. And she loves just hanging around with dreamy pirate Nate and, just occasionally, watching him climb the rigging or swing his cutlass about. Then one day the Stage Manager, who's always been out to get Bertie, announces before the entire company that she's out on her ear come end of day. Bertie is shocked, refusing to believe it. Turns out, it's true. She's caused one too many catastrophes and the Theater Manager is sending her packing--back into the real world where she came from. Terrified of leaving and determined to stay in her home, Bertie mounts an unheard of production of Hamlet in order to prove her worth. What she doesn't count on is Ariel, the airy spirit of The Tempest fame, who longs to claim his freedom and sees Bertie as his ticket out.
Lisa Mantchev's debut novel jumps right into the fray with an endearingly devil-may-care attitude. This attitude is reflected note perfectly in its protagonist. Bertie of the blue dye job, slouching striped socks, and penchant for sticking her fingers in every pie. It took me several pages to figure what in the world was going on and, as I've mentioned here before, I like that. It makes me feel like I'm immersing myself in a fully-formed world that's exists independent of myself. The entire premise of Eyes Like Stars is full of potential and very fun indeed. An orphan girl who grows up literally on the stage. An impossibly sexy air spirit hell bent on freedom. A host of familiar characters flouncing around being dramatic. A couple of chapters in and I was all set to pull up the chair and break out the popcorn. But I ran into problems after that. It turns out that in a story peopled with famous (and infamous) characters, it's pretty dang hard to flesh those familiar faces out. I loved Ophelia, constantly wandering the theater looking for puddles to drown in. I liked Ariel and his smooth-talking, butterfly-ridden ways. But they never leaped off the page at me. They remained two-dimensional and vaguely uninteresting. Now if Bertie herself had been dynamic and compelling, I might have been okay with this. But she, too, wore thin for me over time. I couldn't understand her insistence in demonizing Ariel. His motivations and actions, though underhanded at times, felt true to me. Though I enjoyed Bertie's antics with the sprites, they felt forced and couldn't maintain my attention for the near 400 page count. Her opinions changed at the drop of a hat and for inexplicable and underdeveloped reasons, which bothered me repeatedly. Overall the pace remained frenetic and uneven, the characterization flat and uninteresting, and I finished feeling apathetic at best. With the way it ended, I am interested to see where she takes the sequel, but sadly not enough to pick it up when it comes out.
Linkage
Book Blather Review
The Book Smugglers Review
The Book Spot Review
The Compulsive Reader Review
GreenBeanTeenQueen Review
The Hiding Spot Review
A Journey of Books Review
Melissa's Bookshelf Review
Presenting Lenore Review & Interview