You knew it was coming. After the much-debated Bad Boys post, I felt it was only fair to follow in Persnickety Snark's footsteps and do a Nice Guys one as well. After all, I did publicly admit to falling for one every now and then, and doing so instilled in me the undeniable urge to explain just what's involved in the complex equation that determines whether or not I fall for a Nice Guy. As you can see from the above image, and as some friends have already stated, Gilbert Blythe pretty much takes the cake as far as Nice Guys go in my book. He encompasses all the essential qualities necessary to make him an irresistible Nice Guy and there's no doubt in your mind that you wouldn't want Anne to be with anyone else.
So let's break it down. Gilbert's the best friend. Now, I know, Diana is without a doubt the best friend. But so is Gilbert. I'll tell you why. They grow up together, for all intents and purposes. They know each other's strengths, weaknesses, quirks, flaws. They compete, they tease, they are there for and challenge each other. And so, bearing that model in mind, my personal list of important ingredients that make up the perfect Nice Guy:
Best Friends/Boy Next Door--This isn't a deal-breaker but I will say that when done right it's the opposite of boring. Rather it feels like home. And it has the added advantage of putting me instantly on his side if he's put in the time and/or recognized a long time ago just how cool she is.
Capable of a little wickedness--Just ask Anne Shirley. As an old friend of mine used to say, "Sometimes you just need to know your man's capable of swinging from a chandelier should the situation require it." I like to think of this quality as being nice in a lethal way.
Sense of humor--This one's non-negotiable, I'm afraid.
A guy who Does Something--And by "something" I'm not referring to some grand gesture. He has to Do Something, as in have interests and passions of his own beyond our girl. This, too, is utterly non-negotiable.
Loves her but doesn't put up with her crap--Instead he calls her on it. A lot.
A certain insecurity/vulnerability--As someone who's drawn to the tortured Bad Boys, if I'm gonna fall for a Nice Guy he's gonna have to have some complexity to him, some flaws, something that makes him imperfect. For the record, I have the same requirement for my heroines. See Kristin Cashore's awesome lead characters from Graceling and Fire.
For the love of all that is holy, he doesn't cling--This may be the only-child-hello-you're-in-my-personal-space in me, but I start to get twitchy when they start to get clingy.
It's a delicate balance, my friends. Omit a couple or three of these ingredients and you end up with this: 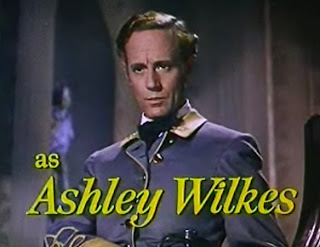 Ashley Wilkes of Gone with the Wind, also known as The Most Annoying Nice Guy in the History of Nice Guys. I spent the majority of the 1000+ page book praying someone would shoot the poor guy and put us both out of our misery. Gah.
On the other hand, mix in five or more of these ingredients together and voila! You get this: 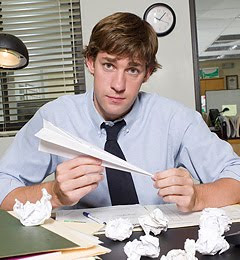 The all kinds of awesome Jim Halpert. Card carrying Nice Guy member but in no way boring, annoying, or cavity-inducingly sweet. He's the ultimate prankster and yet he's emotionally mature and he Does the Right Thing.
Last of all, the triangle issue. This is key. When there is a love triangle involved I will almost always go for the guy with the darker edge. Plenty of documented data to show for that one. In seems as though there are so few triangles in which both boys are drawn equally well. And it's invariably the Nice Guy who suffers (for me) when it all shakes out. Take out the triangle and I'll follow the Nice Guy to the ends of the earth if he can swing from that chandelier with gusto. Leave it in and I lean sadder, but wiser nine times out of ten.
Once more, some favorite Gilbertesque Nice Guys from the vault. Each one of these nice guys makes me swoon. Every single time. But then they've all got pretty much all of the qualities listed above.
Red, Daughter of the Forest

So there you have it. Am I missing any essential qualities? What are some of your favorites? And can you think of some good love triangles in which all three characters involved are equally dynamic?