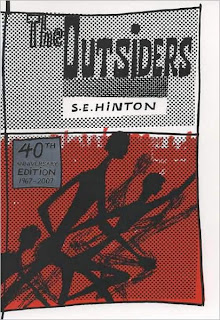 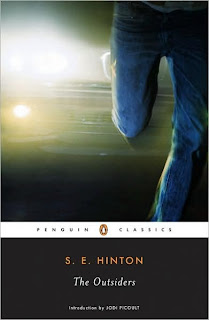 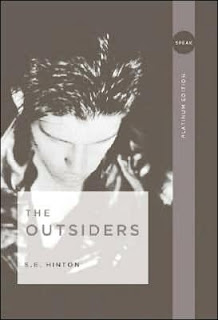 As Banned Books Week winds to a close, I wanted to highlight a frequently challenged novel for this edition of Retro Fridays. It was hard to choose which one to talk about, as there are so many among the oft-challenged books that I love and remember fondly from my childhood or teenage years. I finally chose The Outsiders because of the particular reasons it's been challenged and because, when I read it for the first time I was a teen myself, just a little bit younger than Ponyboy and Johnny. This book had a huge impact on me at that age. I fell so deeply in love with Hinton's simple, vivid writing style. Never had teenagers like me felt so real and present on the page. I couldn't stop telling my mom about it and how good it was and why. I'm sure she still remembers those nights. And thinking about it now, I would have been devastated if someone had told me I couldn't read it or had come and taken it out of my library. I can't imagine not having read it then and I have read it so many times since. It's truly a classic and deserves the praise it's gotten over the years.
Ponyboy Curtis is a Greaser. He lives on the wrong side of town. He acts tough, dresses tough, and lets his hair grow long to look tough. He lives with his two older brothers, Darry and Sodapop, and they barely make ends meet. Darry and Soda work hard to support themselves and let Ponyboy stay in school so that at least one person in the family can graduate high school. Pony's best friend is a sad boy named Johnny Cade who's been beaten around one too many times and spends a lot of time looking over his shoulder, anticipating the next blow. The only family these boys have are each other. Pony, his brothers, and their motley group of Greaser friends watch each other's backs and defend each other when necessary. Particularly when the Socs (rich kids from the other side of town) come looking for trouble. Dangerous Dally, funny Two-bit, somber Steve. Through Ponyboy's eyes we catch a brief, eloquent glimpse into the life of a group of teenagers the world seems to have forgotten, who take life's knocks on the chin and somehow keep going.
I picked a small, worn copy of The Outsiders up off the shelf of a tiny used bookstore in Texas and took it home with me because I felt like the kids on the cover might be worth knowing. How right I was. This story of small-town prejudice and class warfare set in the 1960s has never really aged. The first time I cracked it open I was immediately enchanted by the magical language these kids seemed to speak, a language full of "greasers" and "Socs," "savvys" and "tuffs." I couldn't tear my eyes away. It is a coming of age story and a commentary on the dangers of going through life with blinders on, of judging people who are different from you before you know them. Of not wanting or caring to know them. Every character in this story is backed up against the wall, struggling to survive, and I cried more than once at the injustice of it all. And yet, when you come to the end, you feel the indomitableness of hope, the possibility of change, and the beauty of the human spirit. The Outsiders has been challenged several times on the grounds that it includes rough language, violence, references to cigarettes, alcohol, and for depicting broken families. And we would never want young adults to know that such things exist or, heaven forbid, that they may encounter them in their own lives. *eye roll* I get so angry when I hear hogwash like that. Never mind that it's beautiful, and real, and good. That it will teach its readers about how to treat their fellow human beings, how hatred and fear do nothing but destroy, and how the sunset looks the same no matter which side of the tracks you're from. That's the kind of book I want to read. That's the kind of book I want my children to read. And no one is allowed to tell me no.
Retro Friday Roundup
Bookworm Nation reviews Oliver Twist by Charles Dickens