Retro Friday Review: The Road to Damietta by Scott O'Dell 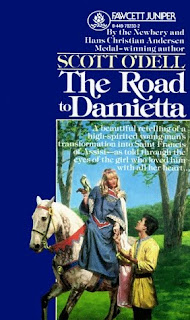 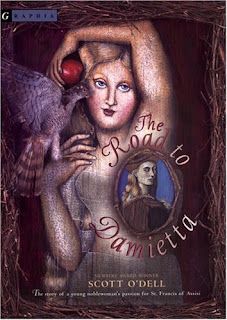 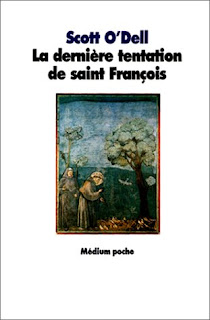 I'm stretching pretty far back here for Retro Fridays this week. I think I was eleven or twelve when I read The Road to Damietta for the first time. I was in the middle of a serious Scott O'Dell binge and had just moved back to the States after living in Italy for a few years. So it had the added attraction of taking place in that country I loved at a time when I was having a fair bit of trouble transitioning back to the American culture and pace of living. I'd already burned through Sarah Bishop, Island of the Blue Dolphins, The Serpent Never Sleeps, The Spanish Smile, and Streams to the River, River to the Sea by the time I came across a copy of The Road to Damietta in a narrow, dusty bookstore in West Yellowstone. My copy had the cover you see above on the left. I have always liked it. Though the French cover in the middle is also quite nice. I have to be honest and say that the current cover on the right kind of scares the crap out of me. Don't think I would ever have picked it up based on that cover alone, which would be a shame as it's really a beautiful book and one of the first young adult historical fiction novels I ever read. O'Dell was great for introducing me to so many time periods I was unfamiliar with as a young teen.
Ricca di Montanaro is thirteen years old and irrevocably in love. The object of her affections is Francis Bernardone--the son of a wealthy merchant and general bad boy about town in Assisi. Though most of the men look down on Francis, most of the women in town follow him with their eyes and stay up at night whispering word of his exploits to one another. Ricca and her best friend Clare di Scifi are no exception. But when Francis publicly renounces his father's fortune in favor of a life of poverty and spirituality, Ricca's hopes are shattered. Over the next several years, Ricca determinedly follows Francis, alarming her parents and family with her single minded pursuit of a man who has left behind all things worldly. When the fifth Crusade marches to Damietta, Ricca joins the march because Francis is there. It is at the fateful walls of Damietta that she sees firsthand the horrifying depths that violence and passion can reach when employed in the name of God. Disillusioned, his health ruined, Francis returns to Assisi and Ricca, as ever, follows him home one last time.
I have always found the history of St. Francis a fascinating topic. This is a fictionalized account told through the eyes of a young woman who decides she will love this young man for the rest of her life. It is an interesting specimen as Ricca herself is not very likable. She has many qualities I admire, including her doggedness and determination to remain true to herself. And she clearly recognizes something in Francis very early on that others do not. At the same time, she can be petty and unbelievably blind to realities, and these flaws persist to the end of the story. Normally, I might dismiss her out of hand. But for some reason her story (and particularly Francis') still resonate with me. I'm not sure if Ricca ever truly understands the man who became a saint. She and he are different kinds of creatures entirely. But in the end she does come to understand herself. And thus she achieves a kind of peace, I think. This is a novel about transformation and unrequited love, of human suffering and divine faith. It is haunting and real, never dipping into a cloying, romanticized take on the historical events it fleshes out. It is probably my favorite of O'Dell's many novels and, when I had the opportunity to travel to Assisi a few years ago, it came back to me with a vengeance as I walked the rose and white cobblestones of that hilltop town and remembered Francis and Ricca.
Retro Friday Roundup
Bookworm Nation reviews The Last of the Really Great Whangdoodles and Mandy by Julie Andrews Edwards