Retro Friday Review: The Ruby in the Smoke by Philip Pullman 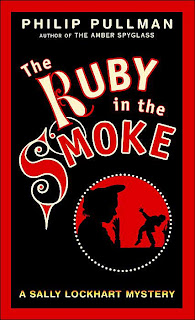 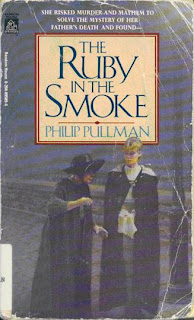 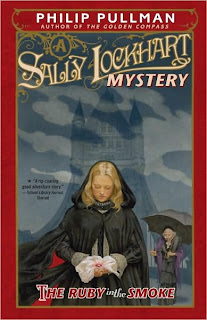 I remember buying my copy of The Ruby in the Smoke at a B. Dalton bookstore in San Antonio, Texas. I liked the cover with the young girl in the cape holding something mysterious in a white handkerchief for a slightly creepy old woman to inspect. But, in the end, this was yet another example of a book I bought for the opening lines alone.

On a cold, fretful afternoon in early October, 1872, a hansom cab drew up outside the offices of Lockhart and Selby, Shipping Agents, in the financial heart of London, and a young girl got out and paid the driver.
She was a person of sixteen or so--alone, and uncommonly pretty. She was slender and pale, and dressed in mourning, with a black bonnet under which she tucked back a straying twist of blond hair that the wind had teased loose. She had unusually dark brown eyes for one so fair. Her name was Sally Lockhart; and within fifteen minutes, she was going to kill a man.

Yeah, there was sort of no way my 12-year-old self wasn't going to make a beeline to the cash register with that one. All I knew was that it was set in Victorian London, it was a mystery, and it clearly featured a girl I wanted to get to know better. I had no idea it was the first in a trilogy, or how involved I would become in the incredibly intricate plot that stretches out over all three books. It should be noted that Pullman published a fourth volume almost ten years after The Ruby in the Smoke, but it is less of a direct sequel and more a companion novel to the original trilogy.
Sally Lockhart is so very far from your average 16-year-old. Even your average 16-year-old in 19th century London. Her father has recently been murdered and she is intent on uncovering the identity of his killer and bringing the villain to justice. As such, she comes to his offices in London to meet with his partner and find out if he knows anything about Mr. Lockhart's demise or the phrase, "Beware the seven blessings," which she came across in a fragment of a letter sent to her from Singapore. Shortly after her arrival she becomes embroiled in another murder, the vagaries of the opium trade, and the mystery of the disappearance of the fabled Ruby of Agrapur. Along the way she encounters a few associates who become true friends, including a young scarecrow of an errand boy named Jim Taylor and an amiable photographer by the name of Frederick Garland. She will have need of her friends before the game is played out and she races against the clock to make sense of her convoluted past and discover just who is behind the strange web of betrayal and deceit that has taken over her life.
Everyone is familiar with Philip Pullman's much more famous His Dark Materials trilogy. I snatched up the first book when it came out because I was already a huge Pullman fan because of the Sally Lockhart books. And I enjoyed The Golden Compass just fine. But I got halfway through The Subtle Knife and the whole thing just...petered out for me. I'm still not exactly sure what happened except that I kept wishing the entire time I was reading about Sally instead. But in my experience few people have read this set of excellent mysteries. They are dark, dire, and grim, to be sure. But they are also absolutely delightful. And bite-your-nails-to-the-quick intense. Sally herself is such a strong character--a perfect blend of independence, diffidence, integrity, and intelligence. Following her growth and development over the course of the trilogy is an absolutely moving experience. Each book matures in both subject matter and length. The Ruby in the Smoke reads like Dickens meets Arthur Conan Doyle meets Lloyd Alexander and that combination proved too charming for me to resist. I could not put it down until I finished it and I immediately went out and bought the next two books. They did not disappoint, but rather ratcheted up the stakes with each passing page. Pullman somehow manages to create the atmosphere of a vintage penny dreadful, while peopling it with fully fleshed out characters who work their way seamlessly into the reader's heart and affections. In fact, I vividly remember breaking down sobbing while reading a certain scene in the second book--Shadow in the North. It is one of my very first memories of connecting with a set of characters so much it was physically painful to me to watch them suffer. An engrossing series highly recommended, particularly for fans of Libba Bray's Gemma Doyle trilogy and Laurie R. King's Mary Russell series.
Reading order: The Ruby in the Smoke, The Shadow in the North, and The Tiger in the Well. Companion novel: The Tin Princess.
Linkage
Bookworm 4 Life Review
Fyrefly's Book Blog Review
Jenny's Books Review
things mean a lot review