Girl in the Arena by Lise Haines 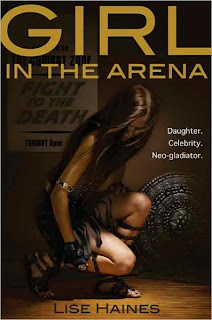 So I'm working my way through all the Cybils YA Fantasy/Science Fiction nominees, when Girl in the Arena shows up on my doorstep (thank you, Bloomsbury!). Truthfully, I'm a little supernatural creatured out just about now and so this dystopian, neo-gladiator, fight to the death novel seemed made to order. I remember seeing it at BEA and somehow not snagging a copy. I'd read a few reviews here and there, some favorable, some middling, and I knew I loved the cover. I mean, look at that. It's awesome. Admittedly, I could do without the cheesy tagline and the "Fight to the Death!" sign in the background. And, having read the book, a certain aspect of the cover is sort of glaringly inaccurate. But somehow I was able to overlook these minor quibbles, because that's simply one sweet cover. In retrospect, I think it's a good choice as that particular inaccuracy should be part of the reading experience and not ruined by the cover art.
Lyn is known as the Daughter of Seven Gladiators. Her mother, Allison, has made a career of marrying gladiators and perfecting the persona of the perfect Glad wife. The seventh (and current) husband, Tommy G., is Lyn's favorite by far. He actually spends time with her and her little brother Thad. He's stuck by her manic mother, when no one else can stand her. He even supports Lyn's growing interest in nonviolence and listens to her read from the book she is writing--A History of the Gladiator Sports Association. But their time together is growing short as Tommy stares down the bullet of what he fears will be his last match. His next opponent, Uber, is said to be the real deal. And Thad's eerie, erratic predictions don't bode well for Tommy surviving his next episode in the arena. But when Uber stands over Tommy's body and scoops up the bracelet her stepfather wore for good luck, Lyn's world unexpectedly fragments into more pieces than she can piece together again. For it's her bracelet Uber scoops up. And Lyn knows the GSA bylaws better than anyone. The only gladiator allowed to wear that bracelet is her father . . . or her husband.
I could not put this book down. I mean it was physically difficult to tear my eyes away from the page. Yes, it's a dystopian novel about gladiators fighting to the death while thousands, millions of desensitized viewers watch live and on TV. And, yes, it features a young woman who is determined to protect her family at all cost. But there the similarities to The Hunger Games end. Where Suzanne Collins' book takes place in a futuristic post-apocalyptic chunk of North America, Lise Haines' novel is set in an all-too-familiar present-day America. I spent the entire time feeling like this kind of ultra-violent, death-as-entertainment society could be just around the corner, that today's reality shows are one step away from the bizarre rituals Lyn is privy to. Interestingly, growing up in the military, I felt a surprising kinship with Lyn, Mark, and Uber's experiences growing up in the Glad culture. I've had countless conversations over the years with other military brats who echoed my thoughts. It's simply a culture of its own, separate and unique from others and only those who are "born in," as Lyn would say, can fully understand what it's like and what it means. The writing was abrupt and choppy in just the right way, dashes in place of quotes, etc. It reminded me at times of Robin McKinley's Sunshine. A favorite passage:

--Lyn, how did you get injured?
This from a tall male reporter with chopped blond hair.
--People were cheering wildly for Tommy at the stadium, I say. --I think a bottle flew out of someone's hands in the excitement.
--Do you think it's possible that someone aimed it at your head intentionally?
I look up at the house again. Thad is pacing back and forth in front of his bedroom window now. He waves. I wave back. He motions frantically for me to come into the house.
--Glad fans everywhere have shown enormous respect for my family and thought Tommy G. fought heroically. Their loyalty is helping my family through this loss. It is, however, a rough sport. People do get killed. Though I should add that Caesar's Inc. works very hard to ensure maximum safety to those who attend the competitions.
Mark whispers in my ear, --You're good.
--Have you met with Uber? another reporter asks.
--No. Not yet.
--So you plan to?
--There are no plans at this time, I say.
--Do you dream of becoming a Glad wife?
Up in the house, Thad pleads with me to come inside. Cameramen and photographers push their equipment as close as possible now, closer. The soggy summer air presses in. And I realize that I'm right there, at the end of a perfect media moment. All I have to do is come up with something that rings with warmth, something that conveys hope to a million girls about the life of the GSA wife. Then I'll be out of here, released into our home, into Allison's mind, my brother's predictions. But there's something about this particular question. I think of the number of times Allison has been asked about any plans to become a Glad wife again. And suddenly my mind is thrown into reverse and I just toss off an answer, the first thing that comes to mind.
--Sometimes I dream of becoming a gladiator.

And that's Lyn. Completely and firmly incapable of spouting crap to the media, to her family, or to herself. It's so much of why I loved her. She doesn't prevaricate, she doesn't hedge, she tells the truth. She takes her responsibilities and her heritage beyond seriously, yet she is true to herself and her growing understanding of the horrors of the society she has grown up in. She refuses to perpetuate the system that has entrapped her mother and held their lives hostage for so many years. I had waffled back and forth on whether or not to read this one, going from eager excitement to fearing it was merely a cheap Hunger Games knockoff and not wanting to risk the disappointment. I'm so glad I did because, like its protagonist, Girl in the Arena stands completely on its own feet. It's dystopian storytelling at its most honest, urgent, and very best. It's bleakness tempered by true friendships and honest interactions between human beings shoved into conditions they were never meant to withstand. The few quiet scenes between Lyn and her brother Thad, her best friend Mark, and particularly her opponent/intended Uber rang with authenticity. I freaking loved this book and it has instantly earned a spot on my Best Books of 2009 list.
Linkage
The Compulsive Reader Review
Frenetic Reader Review
The Hiding Spot Review
Maw Books Review
Reading is My Superpower Review and Interview