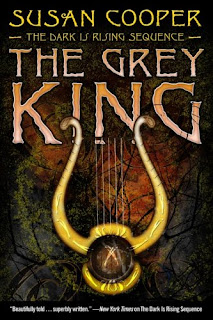 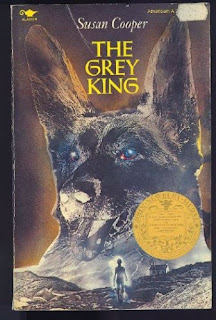 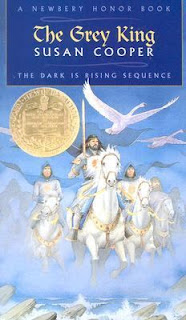 Seeing as how I've already written Retro Friday reviews of both my favorite Robin Hood retellings, it was really only a matter of time before I started in on my favorite Arthurian novels. Somehow the two have always gone together in my head--Robin Hood and King Arthur--the best of the best when it came to British mythology and lore. Truth be told, I've been mildly obsessed with both ever since I was a girl and I have a soft spot in my heart for the first encounter I had with each in novelized form. As far as Robin Hood goes, that was Robin McKinley's The Outlaws of Sherwood. With Arthurian lore, it was Susan Cooper's The Dark is Rising Sequence. The sequence is actually a five-book series following two groups of people embroiled in the centuries-old conflict between the Light and the Dark. The first group are the three Drew children--Simon, Jane, and Barney--who become involved through their connections with their mysterious Great-Uncle Merry. The second is a long line of warriors for the Light known as the Old Ones. They culminate in the last (and youngest) of the Old Ones--a deceptively ordinary boy by the name of Will Stanton. The books weave back and forth between these two groups, sometimes crossing paths, sometimes flying solo, until they all join forces in the final volume. For the purposes of this post, I decided to focus on the fourth (and my favorite) book--The Grey King.
The Grey King opens with Will Stanton delirious with fever. He is certain he has forgotten something vitally important, but cannot for the life of him remember what it was. Having contracted hepatitis, he is sent to stay with his aunt and uncle in Wales for his convalescence. Slowly, as he begins to regain his strength, his memory returns and it becomes clear why he has been sent to an all-but-forgotten valley in Wales at this particular moment in time. The key is in these lines from prophecy:

On the day of the dead, when the year too dies,
Must the youngest open the oldest hills
Through the door of the birds, where the breeze
breaks.
There fire shall fly from the raven boy,
And the silver eyes that see the wind,
And the Light shall have the harp of gold.
By the pleasant lake the Sleepers lie,
On Cadfan's Way where the kestrels call;
Though grim from the Grey King shadows fall,
Yet singing the golden harp shall guide
To break their sleep and bid them ride.
When light from the lost land shall return,
Six Sleepers shall ride, six Signs shall burn,
And where the midsummer tree grows tall
By Pendragon's sword the Dark shall fall.
Y maent yr mynyddoedd yn canu,
ac y mae'r arglwyddes yn dod.

Will soon encounters an unhappy young boy named Bran who lives with his father on a neighboring farm. With his white dog Cafall at his side, Bran introduces Will to the mist-shrouded land he calls home and, bit by bit, the lines of the prophecy begin to take shape. Together these two lost boys must join forces to defeat the Dark that is on the rise.
This book is hauntingly beautiful and redolent with the lyrical Welsh language and an atmosphere as thick and rich as the fog surrounding the peak of Cader Idris. I love this entire series, but The Grey King is where it all comes together for me. And the character of Bran Davies is one of the main reasons why. What a compulsively sympathetic character Cooper created in Bran! Somehow she crafted a young boy with a heart full of pain and confusion, slammed on his head a powerful legacy, and managed to keep him so real it's breathtaking. My heart went out to him when I met him at 11 years old and it does the same today so many years later. The friendship between the two boys is tenuous and riveting to watch unfold as they both embody that incongruous and contradictory blend of youthful anguish and wisdom beyond their years. The supporting cast of characters is just as wonderful and varied, none of them fully good or evil, but inhabiting the many margins in between those absolutes. This is the most moving and heart wrenching of the books in the series and it is where the Arthurian legend comes into play most strongly as the identities of the raven boy, the eyes that see the wind, and the Sleepers themselves are revealed. The results are stunning and spur the reader on to read the next and final volume in the sequence. This, my friends, is a book of the finest kind. Winner of the 1976 Newbery Medal, and fully deserving of that honor, I recommend it (and the whole series) for fans of Lloyd Alexander, Madeleine L'Engle, and anyone with a penchant for Arthurian tales.
Reading order: Over Sea, Under Stone, The Dark is Rising, Greenwitch, The Grey King, and Silver on the Tree.