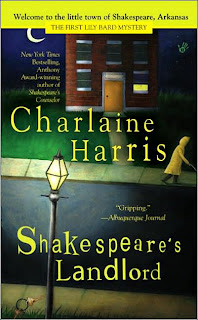 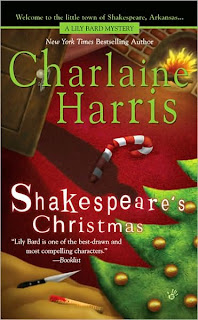 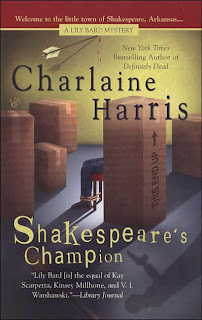 A few years ago I was twiddling my thumbs, waiting for the new Sookie Stackhouse book to come out, when I decided to see what else Charlaine Harris had written. Turned out she'd written a lot of other books, including three other mystery series featuring similarly intrepid heroines. My eye immediately settled on the Lily Bard series of mysteries also known as the "Shakespeare" mysteries because main character Lily lives in the small town of Shakespeare, Arkansas, and because each book has the word Shakespeare in the title. Up until recently all five of the Lily Bard mysteries were out of print, but then Berkeley Prime Crime re-released the entire series in very attractive mass market editions. My mom gave me the first one, Shakespeare's Landlord, as a Christmas present and I started tracking down the other four before I was even twenty pages in. A big fan of the Sookie books, I was instantly drawn to this darker, less humorous but no less compelling series. Since I reviewed Harris' most recent novel, Grave Secret, earlier this week, I figured this edition of Retro Fridays would be the perfect time to talk about this wonderful lesser known series in Harris' large body of work.
Lily Bard isn't precisely in hiding, but she's flying as far below the radar as is humanly possible. After chopping her hair off, toning her body into lean, mean fighting machine, and then hiding it all under the baggiest and blandest of clothes, Lily decides to settle in the sleepy, little town of Shakespeare, Arkansas in an attempt to disappear. She chose Shakespeare at random off the map because she thought it was rather poetic given her last name. During the day Lily works as a cleaning lady, while at night she trains hard at bodybuilding and karate at the local gym. Every night she hopes it'll be hard enough to allow her to sleep. In her line of work, Lily is in and out of homes, apartments, and office buildings all across town. She sees and hears a lot more than she'd like. Most of it is just your usual small town gossip. But one night, while out on one of her frequent restless midnight walks, Lily sees something unusual. Someone pushing a cart filled with a large, lumpy something wrapped up in black plastic garbage bags. When Lily finds out just what is inside those garbage bags, she becomes inextricably immersed in exactly the kind of gruesome crime she's worked so hard to avoid.
And that is how the series kicks off. Lily, herself, is an extremely tough, conflicted character. I took to her at once. She lives an incredibly regimented, perfectly calculated life and it's almost painful to watch this thread of dark chaos worm its way into her peace and order. And while she is about as alone as a person can get, Harris peoples Shakespeare with a whole town's worth of kooky, creepy, and funny characters. All of whom Lily attempts to sidestep with varying degrees of success. With each book in this series, we learn more about Lily and her nightmarish past as she learns more about herself and those around her. In the second book she is joined by a character who is a particular favorite of mine and the two of them together form one of the most well-suited pairs I've ever come across. A glimpse of Lily:

Once upon a time, years ago, I thought I was pretty. My sister, Varena, and I had the usual rivalry going, and I remember deciding my eyes were bigger and a lighter blue than hers, my nose was straighter and thinner, and my lips were fuller. Her chin was better--neat and determined. Mine is round. I haven't seen Varena in three years now. Probably she is the pretty one. Though my face hasn't changed, my mind has. The workings of the mind look out through the face and alter it.
Sometimes, some mornings--the ones after the really bad nights--I look in the mirror and do not recognize the woman I see there.
This was going to be one of those really bad nights (though I had no idea how bad it was going to get). But I could tell there was no point in going to bed. My feet itched to be moving.
I dressed again, throwing my sweaty workout clothes into the hamper and pulling on blue jeans and a T-shirt, tucking in the T-shirt and pulling a belt through the belt loops. My hair was only a little damp; the blow-dryer finished the job. I pulled on a dark windbreaker.
Front door, back door, kitchen door? Some nights it takes me awhile to decide.

I worked my way through this series with palpable pleasure and it was a sad day indeed when I closed the fifth one knowing there would be no more. These are straight up mysteries with a Southern flavor, a fair bit of violence, intense encounters of all varieties, and a lot of grit. There isn't even a hint of the paranormal and all the energy goes into the character development and an honest depiction of a strong woman working hard to stay true to herself and keep the ghosts at bay. Like Harris' more recent Harper Connelly series, I think the Lily Bard mysteries deserve a good deal more attention and I hope those looking to branch out on the Sookie series will find a good home in Shakespeare. I certainly did.
Reading Order: Shakespeare's Landlord, Shakespeare's Champion, Shakespeare's Christmas, Shakespeare's Trollop, and Shakespeare's Counselor
Retro Friday Roundup
Bookworm Nation reviews The True Story of the 3 Little Pigs by John Scieszka