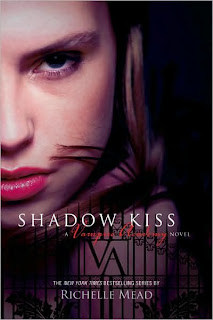 It's one roller coaster ride reading all these Vampire Academy books back to back like this. I'm actually starting to have trouble keeping the events separate and compartmentalized in my head. It all feels like one headlong rush to me. I maintain that the world itself is the real draw. I like how cold it feels, how dangerous and yet limned with the hint of hope and possibilities. The characters are full of potential and somehow keep their hooks in me despite the fact that I still feel parched in the depth department. Shadow Kiss is the third installment in Richelle Mead's very popular Vampire Academy series and, though it's taken me awhile to get around to reading them, I have blown through them without a backward glance.
Rose isn't the same girl anymore. Having bagged her first Strigoi and watched her friend die at their hands, she endures the ceremonial tattooing process with an almost detached stoicism. The moment was in no way, shape, or form the way she imagined it would be. Dogged as ever, she presses forward with her studies, her training, and her dedication to her friend and charge Lissa. Despite the fact that she's now regularly encountering the shade of her dead friend around every corner. And having trouble controlling unusual mood swings. And not assigned to Lissa for her Guardian practical training. Instead she gets Christian and her friend Eddie gets Lissa. Having bonded with Eddie (and Christian to a degree) through the events at the end of Frostbite, Rose manages to keep her lashing out to a barely contained level and directs her rapidly disintegrating attention to keeping Christian safe. As her anger rises, her last shreds of composure are shot to hell by regular contact with both doomed flame Dimitri and new St. Vlad's resident Adrian Ivashkov.
This is the thickest Vampire Academy book yet, and I was pleased with that fact initially. I've been wanting "more" and hoped this third volume with come through for me. In some respects it does. I like how Rose finally turns her attention inward and, when pressed, pays some attention to what's going on inside. I'm also glad she's making a few friends other than limpid Lissa and dour Dimitri. Though I never really bought the whole Mason thing, I thoroughly enjoyed watching her interact with Christian, Mia, Adrian, and particularly Eddie. The mutual respect and willingness to work together to protect their assigned Moroi lent a nice maturity to their actions and the calling and burden of the Guardians. I've enjoyed the history of St. Vladimir and his shadow kissed partner Anna from the very beginning and I liked how that played out in this more modern story as well. However, I have to say it was mostly a slog getting through Shadow Kiss. Those interesting bits were overshadowed by so much telling, so little showing, and a healthy dose of predictability. These drawbacks kept me from fully engaging. I kept wishing book two had been the longer one and that there were more scenes with Adrian in them. I saw the end coming a mile away and, as it mirrors a certain event in a certain TV series I followed religiously, I threw back my head and groaned when the fateful moment finally came. I was so not okay with it. So. I know this was everyone's favorite, but for me that spot is still held by book two. Will I be picking up the fourth book? Yes. Why? Because I am an Adrian junkie. And, yeah, I want to find out what happens to Rose. You'll be hearing from me soon.
Linkage
The Book Smugglers Review
The Compulsive Reader Review
Darque Review
Em's Bookshelf Review
mindful musings review
Persnickety Snark Review
SciFiGuy Review
yaReads Review