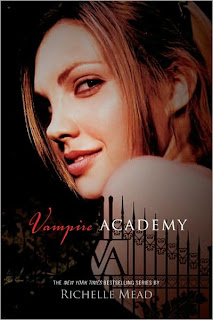 You know how if you don't start a series it can never let you down? I'd been avoiding Richelle Mead's Vampire Academy books for that very reason. I kept reading encouraging reviews from reliable sources and just not following through on picking up the first book. Then the Cybils rolled around and Blood Promise, the fourth Vampire Academy book, was nominated. And since it's almost physically impossible for me to read a series out of order, I decided it was time to jump in. I'd managed to avoid knowing much of anything about the series, so it was quite fun to be immersed in a completely new world. This was also my first Richelle Mead book and I was interested to get a feel for her style.
Rose and her best friend Lissa are on the run. For two years they've been traveling from city to city, posing as college freshman. Rose is determined to fulfill her duty and protect Lissa at all cost from the danger pursuing them. Lissa is a vampire princess and Rose is a half-human, half-vampire guardian known as a dhampir. In their world, there are two kinds of vampires--the Moroi and the Strigoi. The Moroi are mortal vampires. They're the "good" kind. They only feed on willing donors and they have magical capabilities they develop and train at academies such as St. Vladimir's. The Strigoi, on the other hand, are immortal. They're the "bad" kind. They feed on who and what they will and they are impossibly fast and terrifyingly violent. With the Strigoi on their tail, half-trained Rose is forced to relent when a force of fully-trained dhampir show up to drag them back to St. Vlad's. Having burned her last bridge, Rose agrees to submit to one-on-one training with dhampir legend Dimitri Belikov in lieu of being kicked out for good.
I was immediately involved in this world Richelle Mead has created. Honestly, I've had a string of lame reads lately and have been seriously craving some solid world building, some characters to sink my teeth into. And on the world building front, Vampire Academy comes through. It starts right in the middle of the action and doesn't let up. The notion of good and bad vampires is not a new one, but Mead makes it her own by crafting the long history of opposition and war between the gifted Moroi and the damned Strigoi. And then there are the dhampir--the guardians of the Moroi. Neither human nor vampire, the dhampir straddle both worlds and were easily my favorite aspect of the story. I enjoyed Rose's resistance against conforming to expectations. I enjoyed her sparring lessons with tall, dark, and massive Dimitri. And I enjoyed the politics that come into play between the three different classes of creature. The character development didn't feel as strong, unfortunately. I could have done with a little more depth to Rose, a little walk to match her talk if you will. She's appreciatively smart-mouth and full of vituperative angst but it began to wear on me after awhile as I wished she would think a bit before acting on her assumptions or whims. I liked Dimitri all right and I particularly liked Christian--the outcast Moroi royalty who makes it his mission to give Lissa a hard time. I wanted more from them. Still, I liked it enough to pick up the next installment in the series. More to come on that soon.
Linkage
The Book Girl Review
The Book Smugglers Review
Bookworm Nation Review
Dear Author Review
Ink and Paper Review
Medieval Bookworm Review
Michelle's Masterful Musings Review
Racy Romance Review
Steph Su Reads Review
YA Reads Review