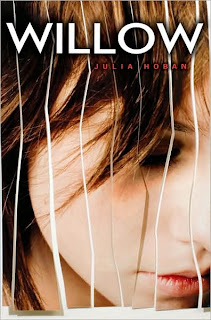 I had, of course, seen Willow all over the blogosphere when it came out last April. It got tons of good press and I suspected it was a pretty solid read. But I admit I stayed away. In part, because of the subject matter. I'm a bit of a lightweight when it comes to self-harm or abuse in all their forms and cutting (Willow's specialty) is a particularly visible and grisly form of self-harm. At the same time, I can and have read several books featuring one or both of these topics and absolutely loved them. It's all in the approach, I suppose. That and how deft a touch the author has and how well the characters are drawn. And then Harmony featured it in her Top Books of 2009 post under the category of My Second Favorite Book of 2009 and something just clicked. I reserved it at my library that day and, when it came in just a few days later, I went and picked it up.
Willow is not okay. Seven months ago her parents died in a car crash with Willow behind the wheel. And it's been seven months of anguish since that awful night. Since then she's left her incredibly normal life behind, moved in with her older brother and his wife and baby girl, and started at a new school where she is sure everyone is talking about her behind her back. The girl who killed her parents. Since then she's also discovered cutting. In lieu of melting down completely, Willow finds release and a brief respite from the overwhelming emotional pain and a brother who won't talk to her and most likely blames her for their parents' death by inflicting physical pain on herself. She's not particular. Arms, legs, even her stomach will do, as long as she can successfully hide it from her brother, her teachers, and her fellow classmates. Willow is scrupulous about taking care of the cuts after and never working in one place for too long. But things are drifting precariously closer to the edge. And then a young man walks into the library on Willow's shift looking for a few anthropology books and Willow is assigned to help him. Willow and Guy fall into rather comfortable conversation and, even though she runs the other way before long, a seed has been planted that will change the fabric of Willow's life from this point on.
Willow is incredibly earnest in its approach to one girl's unhealthy attempts to survive a life that has been ripped apart. I was struck by Julia Hoban's sort of stripped down depiction of Willow's thoughts and actions as she struggled to get through each day. Her relationship with her brother, in particular, rang true for me. You can tell they're both trying so freaking hard not to burden the other with their grief and, in the meantime, failing spectacularly to deal with the grief alone or interact with each other on anything other than a purely superficial basis. I liked how there were no sinister motives on anyone's part in this book. Real life is rough enough without evil lurking around every corner. And it added to the reader's sense of being firmly grounded in the here and now. There were no big reveals. There was no mystery to unravel. There was just Willow. And there was Guy. Who is really too sweet for words and I loved him and felt sorry for him and kept wondering what in the world I would do in his place. I had a slightly harder time connecting with Willow, but that stems mainly from the lack of bone crushing guilt in my life and my subsequent inability to contemplate cutting myself. The point is, I bought them both. And I bought them together. And I cared about what happened to them. Though some scenes were hard to read, I never felt the urge to put Willow down or take a breather and I very much enjoyed it.
Linkage
Book Addiction Review
Bookopolis Review
Bookworming in the 21st Century Review
Harmony Book Review
Not Enough Bookshelves Review
Persnickety Snark Review
S. Krishna's Book Review
The Story Siren Review