February 03, 2010
I have a booktwin. Her name is Martha. She can usually be found here, here, and sometimes over here. She's the one with remarkably cute shoes and her nose in a book.

Martha and I have known each other for close to nine years now. My word, can that be right? Amazingly, it is. We "met" in the Young Adult Reading Group (YARG) at the now defunct Readerville, may it rest in peace. We bonded first and foremost over our love for Tamora Pierce's Alanna quartet. Specifically a mutual adoration of a certain King of Thieves from that series. (We ♥ you, George!) A friendship was born as we quickly began noticing how often our bookish tastes dovetailed and how closely our reading history matched. I still find it uncanny how we discovered the same series at the same age, how we owned the same beat-up editions of beloved books, how we crushed on the same literary characters without even the faintest hint of embarrassment. And how we continue to carry those torches, years later.

Back then, whenever you posted on the 'Ville, a tagline of your choice would show up under your username. The entire time I was a member (more than six years total), mine was set to a couple of lines from one of my favorite poems by W.B. Yeats--"A Poet to His Beloved:"

When I first read that poem, I burst into tears on the spot. There is nothing like that moment, that epiphany, when you realize someone else, who lived ages before you, felt exactly the same way. Was able to put those fragile, precious emotions you feel into words in such a way that they would touch you across time and pages and oceans. As most of you know, there is also nothing like that moment when you actually meet someone else, be it in person or virtually, who gets it the way you get it. It's devastating in the most joyful sense of the word. And it is binding. Martha got that quote. Got the privacy and hope and vastness and risk packed into those two deceptively simple lines. And we have been friends (and booktwins) ever since. 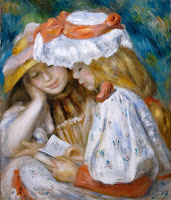 Whenever we come across something marvelous the other has not clued in on, we beg, we cajole, we wheedle, we shout until the other picks it up and devours it. So that then we can experience all over again that moment of connection, that absorption in something larger than ourselves. It took Martha years to get me to read Megan Whalen Turner's Thief books and I will, of course, never stop flogging myself for not listening to her sooner because the books in that series instantly became some of the books of my life. I got her to read (and love) Ellen Emerson White (!) awhile back and have been trying for something like eight years to get her to read Daughter of the Forest. She swears to me that this is the year. And, true to form, I'm on pins and needles awaiting her reaction. We've had the good luck to meet three times in real life and I'm amazed how quickly we fall into the patterns of two people who've been a part of each other's lives for years. Which I guess we have. And for that I am grateful. Because life would be so much lesser without her.

So I'm curious. Is there a booktwin in your life? What books did you bond over?