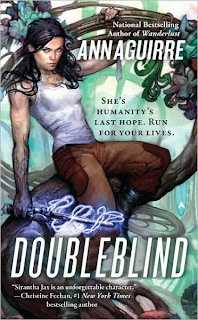 I know what you're gonna say. "Um, Angie? Doubleblind came out like five months ago. What are you doing reviewing it in February? And you call yourself a fan..." Before you judge me too harshly, I thought I'd lost it. I've been ransacking my house for months trying to find it and hadn't replaced it because I knew it just had to be there somewhere. But it was starting to get a bit ridiculous and just when I was about to go buy another copy, I found it! I won't tell you where because it's embarrassing. But it and I were supremely happy to see each other again and I immediately dove into the Adventures of Jax 3.0 and it was like I was right at home again, as though we hadn't been apart for months on end.

Jax is growing up. Despite herself. As the ambassador to Vel's home planet of Ithiss-Tor, she finds herself forced to play a part. A part she feels supremely unsuited for. It doesn't help that she's accompanied by her particularly ragtag group of rebels, each of whom seems to have a reason to distrust her at this point. And none of them more than her former lover March. Destroyed by another war, the tough-as-nails pilot has completely withdrawn so as not to pose a quite literal threat to Jax and her mission. Now that he's just a ticking time bomb, Jax is unsure what (if anything) she can or should do bring him back. And knowing March the way she does, he wouldn't want her to. More and more it seems Vel is the only one she can count on and, now that they're both in enemy territory, so to speak, they will have to combine their not inconsiderable personal arsenals in order to forge the alliance the Conglomerate needs to mount a defense against the encroaching threat of the Morgut.

Doubleblind is a much quieter book than the previous two in the series. But it wouldn't do to underestimate it because it doesn't flash and bang quite as spectacularly as its comrades. If you're a Vel fan, this book is for you. My favorite thing about it was the scenes Jax and Vel shared as he teaches her about the world he abandoned years ago and she teaches him about friendship between outsiders. There's so much political maneuvering going on that the few quiet interpersonal scenes are quite relieving to read. As always, the charged interactions between Jax and March pack such a punch. At this point, three books in, their history is one gorgeous, messy roller coaster and all I could do was hope they made it through without killing each other. I love how tightly coiled March was and how Vel seemed to always be there when Jax was in more danger than she realized. Which is often with Jax. Usually I'm the one holding my breath while reading. In this case it seemed as though each of the characters were holding their breaths, consciously restraining themselves for fear of what horror they might unleash with one wrong move. Doubleblind did have the feel of a transition book to me and I found myself turning the pages quickly, wanting to get to the end already, my mind looking ahead to what Ms. Aguirre has in store for us next with Killbox, which is due out in September.