The Truth About Forever by Sarah Dessen 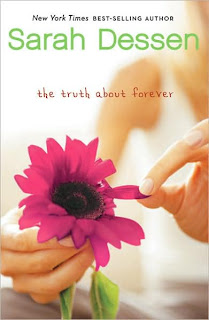 So I've been thinking I should give Sarah Dessen another try for awhile now. It seems every other day people are extolling her virtues and it's not uncommon to hear Dessen referred to as the Queen of the contemporary YA. Quite the crown of laurels, really. Several years ago I picked up two Dessen books in a row--This Lullaby and Someone Like You--I believe it was. I was unenthused. I read both through to the finish but remained distinctly underwhelmed and promptly forgot them. But it's hard to avoid Dessen's work over a long period of reading young adult novels and they always seemed like books I would really like. So after hearing a multitude of people hail The Truth About Forever as their very favorite of her works, I decided it was high time to give her another shot.

Macy strives for perfection. Or at the very least she strives to facilitate it in others. Namely her brainiac boyfriend (and I use the term loosely) Jason. Having lost her father a year or so ago, she and her mother live alone in their huge house making time by ignoring their grief and focusing on making every aspect of their individual lives "perfect." Of course, everything is anything but. And when perfectly milquetoast Jason goes away for the summer, Macy promises to faithfully uphold his job at the local library as well as all their other clubs, cliques, and causes. But then the Wish Catering company invades Macy's home one night when her mother is entertaining prospective real estate clients. Led by extremely pregnant, extremely absentminded Delia, this motley crew soon worm their way into Macy's heart and she finds herself moonlighting as a caterer and, in the process, finds Wes. Who helps her realize there's more to life than frozen grief and insipid perfection.

The Truth About Forever started out well enough. I felt bad for Macy and the incredibly sad circumstances under which she lost her dad. I loved the idea of the crazy band of caterers operating in a chronic state of panic. I was definitely ready to find myself enamored of the kind and handsome Wes. But things just never went anywhere from there. I felt ready to feel those things the entire time without ever actually feeling them. Macy never morphed into a fully-fledged character for me. All of her emotions felt muted and mine followed suit. Though she was described as being torn between her relationship with Jason and her budding romance with Wes, she never really seemed to be. She and Wes spend hours and hours playing the truth game and divulging their innermost secrets to one another. And yet they didn't seem to forge a real, tangible connection. The kind of feelings that we're told were simmering on the surface never bubbled up. And the initially charming and quirky cast of characters slowly fade away into the lackluster background as the story goes on. What can I say? I didn't dislike the book. I just finished it feeling indifferent. Which I know is not the desired response. I feel like I've read books similar to this one done better, more dynamically--the writing, the characterization, the emotions, the whole thing. Jennifer Echols, Lisa Ann Sandell, Julia Hoban, and E. Lockhart come immediately to mind. And so I must conclude that I just don't possess the Sarah Dessen gene and leave it at that. It's a shame, but my reaction is definitely in the minority and thus the multitude of other reviews below.