March 26, 2010
I jumped at the chance to interview Carolyn Crane when she contacted me as part of her blog tour celebrating her debut novel Mind Games. Partly because I've been a fan of her blog for quite some time now and particularly as I thoroughly enjoyed the book itself and was curious as to how she came up with this most unusual of scenarios. You can read my review here. So, without further ado, please welcome CJ to the 'Ville! 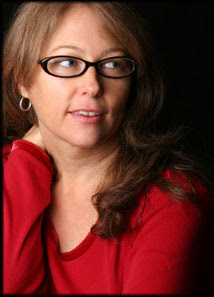 First things first: When did the idea for Mind Games first hit you and what (if anything) did you know right off the bat?
I got the idea from reading a really depressing quasi-philosophical book (Straw Dogs) and  I felt quite disillusioned by it, and I thought, this would be a book you would give to an enemy. In fact, I don’t know why I’m telling everyone this, but I recommended it to somebody I was angry with, like, ‘Oh, you should read this book!’  Anyway, then I thought, what if people did that for money? Affected others on an emotional or psychological level?  I was reading a lot of Laurel K. Hamilton at the time, and it occurred to me there was an urban fantasy in it.
You know what’s really funny, though? If you notice, the hit squad is called “the disillusionists” but they don’t actually disillusion people. It’s more like they force breakdown and transformation. In early incarnations what they did was a lot more like disillusionment than it is now. The more UF-ey I made it, the less philosophical it became.
Give us an idea of your path to publication? High points? Low?
I’ve written all my life—I took writing classes in college, been in writing groups and all that. But I’ve been writing novels really seriously for like 10 years  - a couple novels I slaved at, and I had super high hopes for them and they always almost got picked up, etc, but not. Knowing a book you’ve put years into will never be published is distressing. Honestly, my high point is now. I have a first book out there. People have all this goodwill toward it. It is honestly like a dream.
I love the whole idea of a hypochondriac heroine and the underground psychological hit squad that recruits her! What made you decide to give Justine such a unique (and painful) handicap?
Partly, it’s a case of write what you know, because I used to be a pretty serious hypochondriac. I’m better now. Though, I did give Justine a fear of brain hemorrhages, whereas my area of fear was always cancers in specific organs. I would never have given her that fear, because I would have had to think about it too much.
Another thing is that hypochondria is a total liability with zero upside, so the idea of turning it on its head felt exciting and challenging. You know who I love who did that? Jacqueline Carey, with Phedre in Kushiel’s Dart. Who would think a masochistic courtesan who gets off on pain would have spy potential? It’s a fun way of stacking the odds against a character. 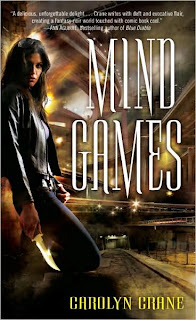 I also love that your girl has a classic comic book hero/heroine alliterative name—Justine Jones. How did you go about naming your characters?
Can you believe Justine was originally named Barbara? But, I have this old writing mentor who was like, character names have to mean something, on a linguistic root level—they can’t just be based on people you have known. And that made sense to me. I chose Justine, because Justine is concerned about being just and fair. Packard was a placeholder name that stuck, but his first name, Sterling, suggests to me a kind of internal purity, but that can be tarnished. As for Jones, it was as you suspect, just chosen for a cool sound.
Speaking of, there’s a strong sort of X-Men/Dark Knight comic book vibe running throughout Mind Games. Are you a comic book fan? If so, who are some of your favorite characters?
I spent a long time being into Judge Dredd - I loved the irony and humor of it, but I don’t consider myself a real comics connoisseur, like my husband who idolizes all things Jack Kirby and esp. Hulk, so I have spent the last 20 years seeing every comic movie, and we have literally thousands of silver age comic books here in our home.
Is there a Mind Games soundtrack? Do you regularly listen to music while writing and/or plotting?
I write first drafts by hand, and I hate first drafting, so as a treat, I listen to music, but it has to be melodic—Aimee Mann, Blur, Elliott Smith, Cat Power. And, I have to listen to half of this one Led Zeppelin CD first thing; it’s an OCD thing. If I start with a different CD, things won’t work out. When doing easy editing on the computer, there is more rock and metal involved. Otherwise, it’s silence.  There is no Mind Games soundtrack.
Do you have a particular time of day and/or place that’s best for writing?
Yes! The morning, in a specific chair or at my computer in my home office. Though, I don’t always have mornings free because I’m a freelance writer (ads, magazine articles), and meetings and deadlines can get in the way. But I fight hard to keep my mornings free. 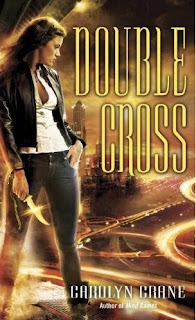 Clearly this cannot be the end for Justine. There must be a sequel in the work. Musn’t there? Tell me what we have to look forward to?
Oh, yes! This is a trilogy, and book #2, Double Cross, comes out in September!
What’s the one book and/or series you’ve been gushing about nonstop lately?
I recently finished Broken by Megan Hart, and just, wow. I am in awe of her books. That whole vaguely connected group of books she wrote  - Dirty, Tempted, etc. I love it! I’m also dying for there to be more of Kelley Armstrong’s Nadia Stafford hitwoman series.
And just for fun, what’s the first word that comes to mind when I say:
Justine: Justice [but, that’s because of #4]
Books: Reading [These answers are so boring!]
Packard: [I  get a picture of Kevin McKidd looking really fiery and no words] 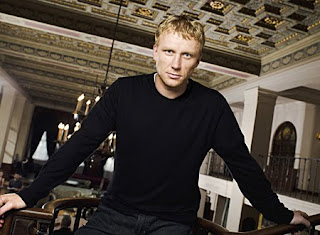 Music: Blur
Otto: I think of his hat here. A beret.
Writing: Pen
Hero: Armor
Work: Deadlines
Sexy: Sweet
Villain: Mustachio [why? IDK!]
Urban Fantasy: controversy
Home: Office [OMG! I’m a workaholic! Hellllp!]
Thanks so much, CJ!
Thank you Angie! This was fun. You ask great questions!
***
And now for the giveaway! Carolyn was so kind as to provide a signed copy of Mind Games to give away to one lucky commenter. All you have to do is tell us what your superhero (or evil mastermind!) name would be. This giveaway is open internationally and will run for one week, closing at midnight on Friday, April 2nd. I'll announce the winner on Saturday. Please be sure to leave me a way to contact you.