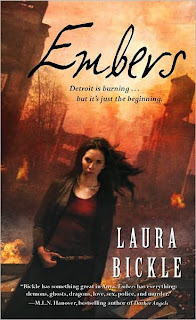 I'm fairly certain I ran across my first mention of Laura Bickle's debut urban fantasy Embers in one of Doug's alarmingly thorough and most excellent urban fantasy round-ups over at SciFiGuy. And, as always, I responded immediately to the Chris McGrath cover art. His style works for me and I liked the wavering title font, the torque around the woman's neck, and the burning city behind her. Little did I know how accurate the attention to detail on all of these elements was. Having read the book, I love the cover even more. It's one of those rare things in the publishing world--a perfect fit. Embers came at just the right time for me as well. I've been in just the teensiest bit of a funk, mostly to do with real life stress (sick husband, sick daughter, work silliness, etc) and one day I found myself at the bookstore with my boy--the two healthy ones out for some air--and we decided we would each pick out one book to take home with us. He chose a Calvin & Hobbes. I went with Embers. We both of us have been extremely pleased with our purchases.

Anya Kalinczyk's life seems to be going up in smoke. As a former fire fighter and current arson investigator for the Detroit Fire Department, she's used to skirting flames. But it's her private life that's got her treading too close to danger these days. Anya is a Lantern--a very rare type of psychic medium whose primary ability is sucking up spirits. By day she tracks down your run-of-the mill arsonists, by night she prowls the city with a ragtag group of ghost hunters, locating and neutralizing malevolent spirits lurking beneath Detroit's rough exterior. But Anya's tired of it all. Every ghost she swallows takes a toll on her emotionally and physically and, after one last rather grisly job, she informs the gang that it will be her last. She's going home to curl up with her salamander familiar Sparky and wake up to a less chaotic life. Unfortunately, her friend Brian--the resident tech geek in the group--has a hard time letting go. And the thing is Anya likes Brian. She likes him a lot. But every time she's gotten close to someone in the past, it's quite literally blown up in her face. The people she loves tend to get hurt and she has no interest in that happening to the lovable iPod listening, night vision goggle toting computer lab guru who's got a crush on her. But that's before her professional and private lives collide when a supernatural arsonists begins systematically burning up buildings across the city and Anya is the only one who can put the pieces of the puzzle together. She can't do it alone. But how many of her friends and co-workers will die before the force behind the flames is destroyed?

Embers is exactly what I was hoping it would be--just a killer debut urban fantasy. I connected with the characters immediately, but almost as importantly, I connected with the setting. My favorite urban fantasy series feature a place that is as much of a character as the supes and beasties that call it home. And I absolutely loved Bickle's burning Detroit, a city on the verge of consuming itself. A city, as Anya bleakly observes, that no sane person would want to stay in, but that she can't help but hope some will. Someone with the vision to reinvest and rebuild in the future of both the city and the isolated residents who walk its dying streets. The narrative is dotted with very real glimpses into the gritty lives of everyday people on the streets. These are thrown into relief by the side-by-side depictions we get of those other everyday people who died and are lingering for whatever reason. The effect is at once thoughtful and haunting. As for Anya, she's my kind of heroine. She fights the good fight every single day, despite her doubts and uncertainty, despite her fragmented history, despite the very real ghosts that plague her. Luckily, she has one of the best sidekicks I've run across in awhile. A salamander protector--brilliant! Sparky solidifies into the torque she wears around her neck night and day, though he loves nothing more than to slither into corporeal form to chase ghosts with Anya and play with any electrical source he can find. Their relationship is sweet and funny as Sparky is the one being she's never without. I enjoyed all the secondary characters as well, particularly the refreshingly normal (though by no means boring Brian), her good friend and organic witch/baker Katie, and the dark man behind the recent reign of fire himself. This is a dark, serious, and intense read and I was especially satisfied with the resolution. This is the first in a series and yet Ms. Bickle happily resisted the temptation to leave a million and a half plot threads hanging. There are several directions the next book could take, of course, but I finished Embers satisfied and I can't thank her enough for that. A fantastic new urban fantasy and highly recommended. I can't wait for Sparks, which is due out the end of August.