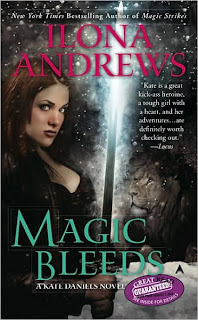 You May authors, you. What are you trying to do to me? I toss and turn in reading slump hell for what seems like weeks on end and then you present me with a string of top-notch books and it's like emerging from a drought into hip-deep water. With mermaids. And flying fish. And seals. What? I like seals. I have to thank the tremendously benevolent KMont of Lurv a la Mode for seeing that an actual living, breathing (oh, you know what I mean) copy of Magic Bleeds

just over a year ago. I thought husband-and-wife duo Ilona Andrews raised the stakes incredibly high in that third installment in the Kate Daniels series, launching it instantly into my top two urban fantasy series right up there neck and neck with Patricia Briggs' Mercy Thompson books. And I have to say, it's been an absolute delight getting to read the latest volumes in both series within two months of each other. Spring is a killer season when it comes to my favorite urban fantasy and I just love it.

Kate is pissed off. And I love it when Kate is pissed off. It means that all manner of mayhem can and will happen. It means she's gonna be swinging her enchanted sword Slayer in seven different directions. It also frequently means Curran will be involved because, quite often, the Beast Lord is the cause of Kate's fury. These are just a few of my favorite things. And the opening of Magic Bleeds

is no exception. All of the above apply. Except that Kate manages to rein in her anger to a degree, enough to set her issues aside and answer the Order of Knights of Merciful Aid's call when they need an agent to head out and investigate a bar brawl gone horribly wrong in the seedy outskirts of Atlanta. Once there, she encounters the damning detritus left in the wake of a powerful, cloaked being who skewered a shapeshifter and left a plague-like calling card. With a ponderous amount of mythical lore at her fingertips, Kate tries to  work with the Order, the Mercenary Guild, the government, and the Pack to uncover the villain's identity before Atlanta becomes a wasteland, its population decimated by any number of heinous diseases. And because the murder involved a shifter, Curran will inevitably want to control matters. Tightly. As things are not going so well in Kate-and-Curran land of late, sparks (and body parts) may fly when they're forced to face (and work with) each other to stop the threat to the city they both call home.

So I could just say, "Every single expectation met. And then some." And leave it at that. But that wouldn't be any fun. You guys really wanna know how good this book is, right? It's so good I stopped more than once mid-book to immediately re-read whole sections, savoring the interaction between these characters I've come to care about with a fierce kind of love. It's so good I laughed out loud. On multiple occasions. Loud enough to make DH smile at me, nod knowingly, and say, "I love it when you're in love with a book like this." It's so good it surprised me, even when I thought I knew it so well. With its addictive blend of a non-stop parade of monsters, and hell beasts, and demons, oh my! and quiet, revealing scenes between Kate and the people she loves most (even if it is wholly against her formidable will), Magic Bleeds

had me at hello and didn't let go its choke hold on my throat and emotions until the final page. Things played out even better than I imagined. And that's saying something, as I wanted so much for Kate. You see, she tries to keep her hope, along with her heritage, hidden in case the worst happens and everyone she loves is forced to suffer for her sake. Me, I'm willing to lay all mine out on the table. If anyone deserves happiness and safety and love, it's her. And, come hell or high water, I want her to have it! And yet, everyone remained themselves. No one sacrifices integrity for the sake of moving the plot forward. Including the hilarious and most excellent Saiman, who, judging by his actions in this one, may actually have a death wish. But, amoral propositions aside, I love the guy. I'm glad Kate has him, even if he does put her in the most awkward situations. This book goes a long way toward addressing all these issues and the question of whether or not her background and training will, in fact, be too much to overcome when it comes to having such dangerous things as friends, family, and relationships. And, as with the last installment, we get another piece in the puzzle of both Kate and Curran. Such pieces never come without a price. And these two warriors know it. Perhaps too well. But they're not that strong for nothing, you know? It was the highest kind of pleasure spending time in their company. My expression shifted from wide grin to intense focus to desperate concern throughout the course of the book. But I closed it with a grin on my face. And you will, too. Because there's nothing but awesome here. Happy reading, my friends.
Magic Bleeds