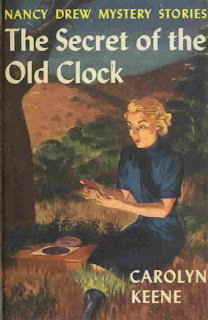 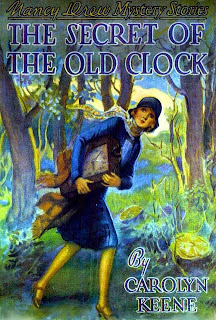 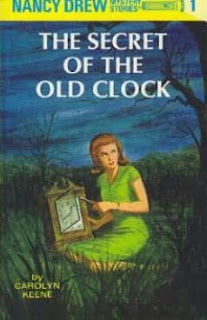 80 years ago, the first Nancy Drew book was published. The Secret of the Old Clock

introduced readers to a young sleuth by the name of Nancy who was intrepid and curious and regularly got herself embroiled in the most appalling intrigues. It also spawned a series that would stand the test of time, appealing to new generations of readers, female and male alike, who followed Nancy (and George and Bess) wherever her adventures took her. I come from two devoted Nancy Drew readers. Both my mother and my father read her growing up. My dad would bike to the library with his little sister Claudia and they would each check out a stack of five Nancy Drews and five Hardy Boys, read them, exchange, read the second stack, and then return them for more. I never get tired of that story. They both grew up to be such avid readers and I know where it all started. My dad still re-reads them from time to time, when nothing else is grabbing his fancy.
I vividly remember reading my first Nancy Drew. It was actually the second book in the series--The Hidden Staircase

--and I was six. It completely freaked me out, gave me nightmares, and I had to put it away and come back later. This still strikes me as funny but I guess I was a fairly sensitive child and it was my first mystery of any sort. I'm just glad it didn't scare me off for good. I returned to the series a couple years later and there was no going back at that point. All my allowance money went to buying new Nancy Drews. When we moved to Sicily I started having a hard time getting my hands on copies. The library had the newer Nancy Drew Casefiles and I was burning through those, but I was also intent on completing my collection of all 56 of the original stories. I remember marching into the tiny base bookstore and negotiating with the manager. If he'd order in the books, I promised to buy them and send my friends in as well. He was skeptical. But I was determined. And I won him over in the end. I've read them all several times each. I think my favorite is still The Clue of the Whistling Bagpipes

. I loved the whole Nancy goes to Scotland episode and the eerie, wonderful highland vibe involved.
The other day I read this Shelf Life article on Nancy's 80th anniversary and found myself dreamily reminiscing on all those years reading and all those beloved books collected. In the article, Catherine Garcia points out that the series is global now as well as the role it played in creating a generation of girls who grew up believing they could be whatever they wanted to be. She also pointed out the lovely new limited edition, special anniversary edition

of that very first mystery. I drooled over it and immediately checked to see if my local stores had it. They did not. Then the following day a small package arrived for me sent by my father who, even though he lives in Africa, keeps tabs on all important things. Inside I found this: 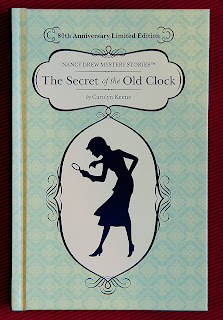 Even an ocean away, he knows me well . Thanks, Dad. I love you, too.