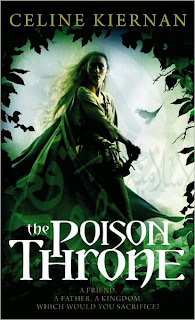 I know I'm a little late on this one, but it's been that kind of month and the nasty reading slump in the middle of it did not help things in the slightest. I didn't want to ruin this read with my foul mood, so I started it, put it down again, and waited until things had picked up some before giving it a go. The Poison Throne

--the first book in Celine Kiernan's Moorehawke Trilogy--is the book Missy suggested I read for the first round of Tell Me What to Read and I eagerly anticipated picking it up. I was especially excited as Missy likened it to Megan Whalen Turner's Attolia books as far as the quality of intrigue and political fantasy go. And as anyone familiar with me knows, this is very high praise indeed. So I picked up a copy at my local bookstore and took it home that night. I have to say I love the covers Orbit has designed for this trilogy's U.S. debut. Previously published in Ireland and Australia, all three books have already seen a handful of lovely covers and I like the leafy vignette and swirling cloak style going on here.

Wynter Moorehawke and her ailing father Lorcan have returned home after five years away in the barbaric North. Home once more, Wynter cannot wait to renew her friendship with her beloved quasi-siblings Razi and Alberon. Both sons of King Jonathan--one legitimate and one illegitimate--Wynter grew up with these boys, running all over the castle that was their home. But when she comes across Razi in the kitchens, Wynter discovers that things have changed in the years she's been gone. And not for the better. Jonathan has changed, gone from a tolerant and fair ruler to a cruel and unreasonable lord intent on naming his legitimate (and suspiciously missing) heir Alberon as dead and grooming the illegitimate Razi on the throne in his place. Tensions are more than high as Razi--a gifted doctor--does not want to be king at all, his people would prefer open war to a dark-skinned by-blow on the throne, and the king appears increasingly unstable and violent. Into this maelstrom Wynter is thrown without a by your leave, yet she is simultaneously expected to accept all these changes without question and play her part as an apprentice carpenter under her father's tutelage. But Razi needs her. And his unusual and generally unwelcome friend Christopher seems to be always underfoot and in need of a watchful eye. And Wynter is determined to stand by her friend and get to the bottom of this mounting disaster.

I was sucked into this novel right away. I enjoyed Wynter's easy relationship with her father and it was fun  feeling my way around the castle along with her as she struggled to come to terms with the magnitude of the changes that had overtaken it in her absence. I loved the slight hints at the supernatural in the cats Wynter used to be able to communicate with and the many ghosts that haunt the castle and can clearly tell when danger is afoot. And, though initially a bit confusing, I liked the historical setting in a sort of alternate Europe, sprinkled here and there with references to such places as Padua and the Moroccos. And I was all set to enjoy Wynter, with her brotherly affection for the educated and kind Razi and her righteously indignant banter with the handsome rascal Christopher. However, somewhere around the halfway mark my enthusiasm began to pall. Nothing seemed to happen and each of the characters became oh-so-tiresome. Wynter was reduced to running here and there after the various men in her life. All of whom, by the way, needed a swift kick in the pants if you ask me. There seemed to be a sort of imbalance across the whole narrative. Characters who are innocent and loving one minute turn into raving lunatics the next, hugs and fond reminiscences are bedfellows with what felt like an out-of-place amount of surprisingly cruel and coarse violence. Wynter adores her "brother" Razi and, despite being frequently annoyed with him putting her off and not telling her things, she forgives him at the drop of a hat. And the instant forgiving soon extends to much more heinous crimes than withholding the truth. So much so that I started to lose my respect for both of them. Disliking Razi made it difficult to believe in him and in Wynter's affection for him. And, as much as I liked Christopher, with his mutilated hands and his mysterious past, I was not exactly keen on 15-year-old Wynter falling for a young man quite so promiscuous as he. All of this is to say that there was quite a bit of potential but it was a struggle  to finish and ultimately fell flat for me.