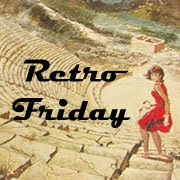 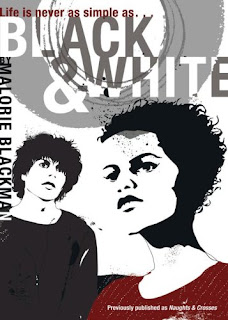 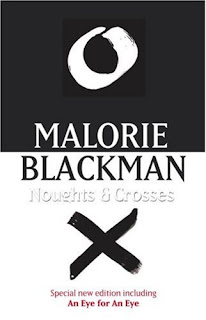 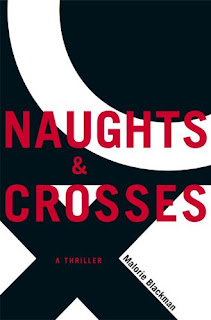 Originally published back in 2001 in the UK, Noughts & Crosses

is the first book in a series by British author Malorie Blackman. I first encountered it as part of the Young Adult Reading Group (YARG) over at Readerville. It was chosen as one of our monthly selections and a dear friend of mine actually picked up copies for several of us while she was in England and mailed them out so we would have time to read them before the discussion. Those were just the kind of people that filled the YARG in those days. Sometimes I miss them all so much it hurts. But my copy (pictured above left) came just in time to take it to Italy with me to visit my parents. And I read it while sitting on their terrace watching the waters of the Mediterranean lap the shore below. When I got back, we had a marvelous discussion and pondered as to why it hadn't been published here in the states. It took four more years for it to come out in hardback in the U.S. (pictured above center), and I quite like the U.S. cover, even if they did change the spelling of noughts to naughts. A couple of years after that the U.S. paperback was released with a different cover and, strangely, a different title (pictured above right). Personally, I'm not a fan of the most recent cover or title. Why mess with something as awesome as Noughts & Crosses

? Why talk down to American teenagers just because they might not be aware that in England Tic-Tac-Toe is known as Noughts and Crosses? It's beyond me and I'll hang onto my hardback and UK copies, thank you very much.

Sephy and Callum are best friends. As kids they don't see any problem with a girl from the privileged Cross class playing with a nought boy from the wrong side of town. And their parents let things slide for reasons (or secrets) of their own. But as growing teenagers, Callum particularly is highly aware of the differences in not only their skin tone, but their education, opportunities, and circumstances. Sephy doesn't want anything to change. She wants to go on tutoring Callum in maths, roughhousing with him on the seashore, and crossing her fingers he gets accepted to Heathcroft High and will maybe be in some of her classes. But Callum walks home everyday to his hovel of a dwelling place and watches the hope in his parents' eyes slowly die. He watches his older brother Jude grow angrier and more volatile by the day. And he watches his sister Lynnette draw farther inside of herself, so that even the family can no longer tell how much of her is left anymore. But Callum does get into Heathcroft. And he and Sephy do strive to keep their unsightly friendship alive. And things, both inside and outside of them, grow more and more complicated just as they grow more and more beautiful. Until one day the pressure becomes too much and something happens that threatens to blow the whole fragile relationship into infinitesimal, unrecognizable pieces.

explores what the world would look and feel like if the ruling class were black and the oppressed, subservient class white. The two main characters--Sephy and Callum--each belong to one "side" and the crux of the problem arises as they grow up and continue to reach out to each other across enemy lines. I won't lie to you--this dystopian Romeo & Juliet setup worried me in the beginning. I felt like I'd read it before, like it would come off as impossibly melodramatic and tired. But from the very first page it was apparent that such was definitely not the case. As unlikely as it may seem, everything about this story feels new and every passage seems chosen and placed carefully for proper effect as Ms. Blackman swiftly and impressively navigates the deep, gray waters of racism and adolescence amid a stifling society at large. Sephy and Callum are easy to like, their personalities are distinctive and strong, and nothing, repeat nothing is easy. But my emotions were captured instantly and held for the entire, intense and heart-palpitating read.
An early passage that, I think, highlights Callum's desperate situation:


We walked into the downstairs room. Lynette and Dad sat on the sofa. Jude sat at the dinner table poring over what looked like a map--not that I was particularly interested. Mum sat down next to Dad and I sat next to Lynette. It was a squash but a cozy squash.

I looked at my sister. "You okay?"

Lynette nodded. Then a slow-burning frown spread out over her face. And that look was back in her eyes. My heart plunged down to my shoes and bounced back up again.

"Lynny, d'you remember my seventh birthday?" I began desperately. "You took me to see my first film at the cinema. There was just you and me and you got annoyed with me because I wouldn't take my eyes off the screen, not for a second. D'you remember you told me that I could blink because the screen wasn't about to vanish? Lynny . . . ?"

My stomach lurched, like I was in a lift that had suddenly plunged down at least fifty stories in about five seconds flat. Every time I convinced myself that Lynette was getting better, she'd get that look on her face . . . She'd stare at us like we were all strangers and she'd insist she was one of them.

"What're you talking about? You're a naught," Jude said with scorn. "Look at your skin. You're as white as the rest of us. Whiter."

"No, it's not. I'm fed up with this. Keeping Lynette in this house so she won't embarrass us by telling everyone she's a Cross. She's barking mad, that's what she is. And Callum's just as bad. He thinks he's better than us and as good as the Crosses, even if he doesn't say it."

"You don't know what you're talking about," I hissed.

"No? I've seen you looking up at this house when you've come back from your dagger friend. I've seen you hating it and hating us and hating yourself because you weren't born one of them," Jude spewed out. "I'm the only one of the three of us who knows what he is and accepts it."

Jude sprang out of his chair, but only a couple of seconds before I did.

"Come on then, if you reckon you're hard enough," Jude challenged.

I stepped forward but Dad got between the two of us before I could do little more than clench my fists.

"See?" Lynette's small, puzzled voice rang out as clear as a bell. "I don't behave like that. I can't be a naught. I just can't."

All the fight went out of me. Slowly, I sat back down again.

"Look at my skin," Lynette spoke as if Mum hadn't. "Such a beautiful color. So dark and rich and wonderful. I'm lucky. I'm a Cross--closer to God . . ." Lynette looked around at all of us and smiled. A broad, beaming, genuinely happy smile that lit every line and crease on her face and squeezed my heart.

"That's enough!" Dad shouted at him.

Jude sat, a sullen, brooding look on his face. Lynette looked down at her hands, stroking one over the other. I looked too. All I could see were pale white hands, blue veins clearly visible through the almost translucent skin. She looked up at me and smiled. I smiled back. Forced it really, but at least I tried.

Make no mistake. This book will wring your heart out. You'll need to breathe a few times rather deeply when you're finished and I wouldn't advise winding it up in public. But it's utterly worth it, a not-to-be-missed hidden gem from the wonderful Malorie Blackman.
Reading order: Noughts & Crosses