A Sonnet for Dr. Hatch 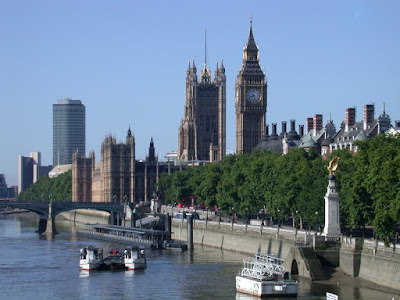 A few days ago I received the news that a professor of mine had passed away suddenly. I hadn't seen or talked to him in a few years, but he played a large role in my academic career and I felt especially saddened at his passing. When I was an undergrad, I applied to go on study abroad to London. Three of my dearest friends went along with me and that semester remains one of the highlights of my life. We had, quite simply, the time of our lives. I've been an Anglophile for as long as I can remember and being able to walk where so many of my literary idols walked and visit their homes and haunts and graves changed me in a way that it is still difficult to describe.

Dr. Hatch was the assistant director of our group and in his early thirties at the time. He brought along with him his wife and three young children and all of us rambunctious college students had a blast living with the directors and their families in the wonderful old Victorian townhouse known to us as "the London Center." Two other professors instructed us in ancient civilization, European economics, and history, but Dr. Hatch's province was English literature. And as I, like Helene Hanff, had come to see the England of English literature it was  his classes that had the largest effect on me during the months we lived and breathed there. I remember reading the entire play of Hamlet aloud in his class and then attending a live production at the Globe. I remember reading Wuthering Heights

and The Hound of the Baskervilles

along with Wordsworth, Keats, Austen, Scott, and a whole host of others. But one particular unit stands out in my mind.

We were working our way through the seventeenth century poets and had been assigned to read several poems by Ben Jonson. You may have heard of him. He was a contemporary of Shakespeare and was known for his criticism and acerbic wit. Though perhaps he is most famous for his praise of Shakespeare, "He was not of an age, but for all time!" Personally, I was not enchanted with Mr. Jonson's work. But the next day at the end of class, Dr. Hatch closed by reading us the poem Jonson wrote on his first son's death at the age of seven. It reads:
On My First Son

Farewell, thou child of my right hand, and joy;
My sin was too much hope of thee, lov'd boy.
Seven years thou wert lent to me, and I thee pay,
Exacted by thy fate, on the just day.
Oh, could I lose all father now! For why
Will man lament the state he should envy?
To have so soon 'scaped world's and flesh's rage,
And if no other misery, yet age!
Rest in soft peace, and, asked, say, Here doth lie
Ben Jonson his best piece of poetry.
For whose sake henceforth all his vows be such
As what he loves may never like too much.

His voice caught as he uttered the line, "Here doth lie Ben Jonson his best piece of poetry." And my eyes filled with tears as he struggled to regain his composure to finish the last two lines. It was one of the most clear and beautiful moments of my life. There in that classroom in a house off of Notting Hill Gate, I felt as though my professor was channeling the man who had written those words close to 400 years ago as he lost his boy--his first child. It was astounding and it has stuck with me ever since.

Shortly after that day, we went as a group to tour Westminster Abbey. Dr. Hatch had told us of Poets' Corner and mentioned that Ben Jonson was buried there along with so many other literary luminaries. I was anxious to see the contradictory rascal's resting place and stopped dead in my tracks when I saw what was carved on his tombstone.

When Dr. Hatch later assigned us to write an Elizabethan sonnet on a topic of our choice, the emotions that had been rolling through me for the past while came to the forefront of my mind, and I found all that early ire wiped away by a single verse. Here's the sonnet I wrote (mind you, this was my first attempt at the form):

"O Rare Ben Jonson!" the gravestone read,
My wandering footsteps their pace did halt.
The corner famous for poets long dead
Held him whom I sought in all of the vault.
"Ben Jonson," I said, "you scoundrel, you!
How did you secure this hallowed shrine?
Outspoken rival and harsh critic too--
Not for you surely, this reverent line!"
Suddenly in my mind thy lines I heard,
Penned for thy son in language of such
Anguish of hindsight and loss endured,
Though skeptical I felt thy poignant touch.
'O Rare Ben' indeed, poet without peers,
Thy immortal words have moved me to tears.

When he handed me back my paper, Dr. Hatch was shaking his head and I became filled with fear that this exacting and dedicated man would tell me it was rubbish and I had profaned an entire art form with my mediocre fumbling. But there was an A written in broad red ink on the top of the sheet and my eyes shot back up to his face in confusion. "You understood," he said quietly. I smiled back at him in relief. "So did you," I said back.

Later, he wrote me a letter of recommendation for graduate school (in English literature, of course) and got me my job teaching composition. I'm grateful to him for so many things. But most of all I'm grateful to him for breathing life into a long-dead and oft-overlooked poet who had something to tell me, who has spoken to me ever since. I'll miss you, Dr. Hatch. As was read at your funeral, if, as Jorge Luis Borges imagined, Paradise is a kind of library, I'm sure they've saved a comfortable spot for you.