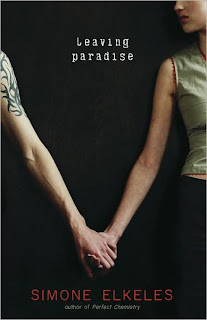 . As you know, I devoured Simone Elkeles' Perfect Chemistry

a few months ago. But I deliberately stayed away from Elkeles' earlier novel because I had heard somewhere it left the reader feeling pretty raw and worked over and I guess I haven't been in the mood for such of late. But before I could decide one way or the other, I heard she was writing a sequel and, very uncharacteristically, I chose to wait until the sequel was out to read both books. No idea where I dug up that little dose of will power as it's generally in short supply around here. In any event, I managed to snag signed copies of both books at BEA and finally settled down to read Leaving Paradise

on the plane ride home. A word on the cover. Originally published in 2007, this book has already had two covers and I actually really like both of them, thought the newer one pictured here certainly looks nicest next to my copies of both Perfect Chemistry novels.

Caleb Becker is on pins and needles awaiting the final verdict on whether or not, after a year in juvie, he'll be allowed his freedom once more. After being convicted for a hit and run accident while driving under the influence, seventeen-year-old Caleb has spent the last year locked up with other underage convicts. Never truly alone, his life has consisted of a never ending succession of humiliations, from strip searches to being watched while he performs even the most rudimentary acts of personal hygiene. Meanwhile, back home in Paradise, Illinois, another life was shattered by the events of that night. Maggie Armstrong never thought she'd be a cripple, that her days on the tennis court were numbered. But when Caleb crashed into her and then fled the scene of the crime, her small set of plans and expectations were permanently altered. In place of school and tennis practice, there was now physical therapy and a wheelchair. In place of laughter and fun with her best friend (Caleb's sister) Leah, there was now quiet fear and solitary dinners at the diner where her mother works to make ends meet. Despite everything that's gone down, she does harbor one last hope--to finish her physical therapy and go on study abroad to Spain for the duration of her senior year. And then Caleb gets his freedom and heads back home to Paradise. And, even with all the time that's passed, Maggie is still nowhere near ready to face everything his unwelcome reappearance in her life means.

I was caught unawares by this book. I'm not sure what exactly I was expecting, but Leaving Paradise

was both quieter and more affecting a read than I planned on. The writing is characteristic of Ms. Elkeles' other books, with the narrative alternating points of view between Caleb and Maggie, full of the same straightforward, somewhat blunt dialogue tempered by a pair of quite sympathetic protagonists forcibly thrust into operating without their safety nets. Interestingly, as much as I adore Perfect Chemistry

, I found this setup less inherently "cheesy." Maggie and Caleb are gentler, in many ways, than Alex and Brittany. Despite the crushing hand life's dealt them, they remain just above complete self-absorption. Their most brutal and biting judgments are reserved, in fact, for themselves--and each other, of course. And I'm a sucker for that sort of vibe. But perhaps most impressive to me was the breathless and delicate sense of pain and fear and barely there hope that pervades the whole. I was frankly engrossed in this very simple story of two hurt teenagers limping toward freedom. Here's one of my favorite scenes early on--a conversation between Caleb and his pen-clicking bruiser of a transition counselor Damon:

I look up at the sky and shake my head. "I don't need your help. My parents and sister . . . they need help more than me. Why don't you treat them like the guinea pig?"

"You've been away for almost a year. Give 'em a break. You act as though they should be apologizing to you instead of the other way around. What did they do wrong, huh? Maybe you should blame yourself once in a while, Caleb. The experience might be eye opening."

"The truth would be eye opening," I say back.

I shake my head. "Nothing. Just forget it."

Damon opens his folder again. That folder probably tells Damon everything about my life before, during, and after my arrest. I wonder if the time I tee-peed Joe Sanders' house is in there. Or the time I beat up a guy from Fremont High for teasing my sister about her perm gone wrong. I used to be looked up to, the cool rebel. Now I'm a convict. Not cool.

He hands me a few sheets of paper. "You live in a small town, Caleb. Not much in choices for community service jobs, but on your questionnaire you said you had experience in construction and small home improvements."

"I worked construction during summers for my uncle," I tell him.

"Okay, then. You'll be required to check in at The Trusty Nail hardware store on Monday after school at three forty-five sharp. Don't be late. They'll assign you a job site and drop off all supply materials needed. When you're done with a job, get a completion sheet signed. Easy enough?"

"I just have a few more questions. Then you don't have to see my ugly mug for another week." What Damon looks up at me he asks, "Any physical contact?"

Damon shrugs. "I don't know, you tell me.Was the old girlfriend waiting on your front stoop when you got home yesterday?"

The urge to laugh gets caught in my throat. "Hardly. My sister hugged me, my dad shook my hand, and I got a few pats on the back from my mom's random friends last night."

"Did you initiate it?"

"Caleb, some guys have attachment problems when they get home. They have a hard time understanding what physical contact is appropriate and what--"

"I touched a girl," I say, interrupting.

I think back to last night, when Maggie tried to stand. The fierce pain she felt was emphasized by her clenched teeth, balled fists, and furrowed eyebrows. Since I've been home, Maggie has been the only person I've actually reached out to touch. It hadn't gone well.

"A girl needed help getting up, so I tried to steady her. End of story." Well, sort of.

"Did she thank you?"

I hesitate, then pick up a rock and chuck it all the way to the baseball field on the other side of the park. "She yanked herself out of my grasp. Isn't that what you want to hear?"

I turn and give him a look. He knows I'm not fuckin' with him.

"Maybe you were too rough."

"I was not too rough," I say harshly.

I reach around and massage the persistent knot on the back of my neck. If I don't answer, Damon'll probably show up tomorrow and every day until I spill the beans. What's the big deal anyway? I glance at the old oak, half expecting to spot Maggie sitting there, her expression wary and angry.

I look over to Damon who's still waiting for an answer.

Then I finally say it. "I touched the girl who I went to jail for maiming."

is another winner from Simone Elkeles. I loved it. Would be honestly happy if it were all to end there. Even if the ending does leave things in a rather agonizing place. I can say that, of course, because I have an ARC of the sequel--Return to Paradise