Return to Paradise by Simone Elkeles 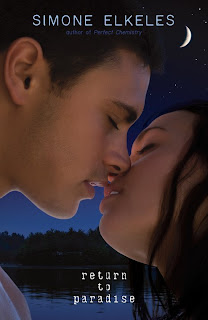 I was so happily surprised (and intensely affected) by Leaving Paradise

that I couldn't wait to start in on the sequel, the inevitably titled Return to Paradise

. Honestly, I loved Maggie and Caleb so much that I savored the thought of them back on the page together, dealing with the awkward and ambiguous place they were unceremoniously left in at the end of the first book. Naturally, snagging an ARC of Return to Paradise

was pretty high up on my list of things to do at BEA. And I hadn't even read the first book yet! I have to say I'm not loving the cover, though. The newer cover of Leaving Paradise

struck just the right note, when it comes to the fear and pain and connection between these two characters. The cover of the sequel just doesn't measure up, in my opinion. It probably doesn't help that that's not how I picture either of them and that kissing under the moonlight by a lake (while it may happen in the book) just doesn't really encompass the whole of what's going on in this story. But enough about that. On to the insides.

Maggie has worked for eight grueling months to put Caleb Becker and his inexplicable desertion behind her. She's gone over and over it in her mind and come to the conclusion that if he wasn't willing to tough it out and stay and fight to keep what was between them alive, then she's not going to waste her life crying over the loss. And she's doing a fine job of moving on. Getting ready to leave for Spain on study abroad, Maggie is spending her summer participating in a teen outreach program wherein she travels with a group of other kids whose lives were altered by substance abuse or violence or unutterably bad decisions, giving talks to other teens who might be on the verge of trouble. Unfortunately, Maggie's resolve is put to the test when Caleb abruptly joins the group. Dragged back from wherever he'd disappeared to by his former transition counselor Damon, this trip is Caleb's last chance to redeem himself and avoid being sent back to jail for living with drug dealers for the last several months. Against their better judgement, Maggie and Caleb set out on the venture, unwilling and unhappy trip mates. Of course there are a few other misfits along for the ride and their stories get interwoven with this one, but the focus remains on the emotional damage these two have undergone in the last year and the large chasm that has cropped up between them when once they were so close.

I don't really know how to put this. But this book was a very big disappointment. Where the first was such a wonderfully absorbing surprise, this one meandered on and on until I had to force myself to finish it. The writing was simply not up to par with that of her previous books and this was one instance of the uncorrected mistakes in the ARC frequently distracting me. I realize these will be corrected in the final version. But the main problem I had with it were actually the odd changes in the two principal characters. Caleb was rough in the first book. As a direct result of spending a year in juvie, he was necessarily changed by the experience. But he was never mean. Coarse and frustrated and full to the brim with anger, yes. But never mean. In an unpleasantly snarky way. And certainly not to Maggie. That hesitant reserve he had when it came to her was such a highlight for me. But in Return to Paradise

, he is mean. Downright lousy sometimes. I didn't buy it, I didn't like it, and it was painful to read not only because of how it affected the other characters but because it felt inauthentic to me as the reader. Maggie was vulnerable and afraid in the first book. As a direct result of the accident that left her maimed, she was understandably that way. And she does grow a spine in this book. Or at least we're to believe she has. But she seems to waffle back and forth all over the place when it comes to taking what Caleb deals her and that, too, felt wrong to me somehow. These two knew each other better than that. Their connection was real and fine and worth reading about before. And I know there needs to be conflict and tension to provide fodder for a sequel at all, but it just came off as messy and immature here. Which is such a shame, as I truly missed that breathtaking, organic connection from Leaving Paradise

. So definitely don't miss the first book. But unfortunately I'd recommend giving this one a pass and just imagining up the ending you'd like in your head instead.