Dead in the Family by Charlaine Harris 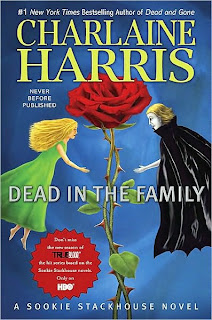 I picked up the new Sookie Stackhouse book the day it came out, but it took me awhile to get around to it. I've been looking forward to a new Sookie book every May ever since I first discovered Charlaine Harris something like seven years ago now. I picked up Dead Until Dark

--the first book--shortly after my son was born and I was going through quite a bit of postpartum depression and starting to wonder if my life would ever take on a shape somewhat resembling the one it once held. Things were blue in every sense of the word, despite how much I adored my little boy and how happy I was he'd come into our lives. And then, during those quiet times sitting with him in the rocking chair, I started reading a little story about a barmaid from Louisiana who can hear other people's thoughts and who latches onto a vampire by the name of Bill when she realizes she can't hear him. Sookie was funny and happy and good and I liked her immediately. The series carried me through until things were feeling right again and it will always hold a special place in my heart because of that.

In this tenth installment, Sookie isn't at her best. She's just emerged from the most violent and threatening experience of her life (and that is saying something) and she just isn't her usual bright-eyed, bushy-tailed self. Everyone around her seems to be dealing with their own personal set of consequences at the same time as Sookie and so she decides to tread water a bit and see what happens. This means maintaining her developing relationship with Eric in front of all her friends and family. This means accepting her brother Jason (and his girlfriend) despite his slew of past mistakes. This means letting her cousin and fairy Claude move in with her when he asks, even though she'd really rather not and she has a good reason to want to stay as far away from fairies as possible just now. But when Eric's maker arrives in town with a truly disturbing young charge in tow, Sookie begins to wonder if this might be the straw that breaks the camel's back where she is concerned. Because of her blood bond with Eric, she's involved in a very real way in his interactions with his powerful maker. At the same time, her friend Alcide is struggling to solidify his hold on the werewolf pack as the government debates forcing supes to register themselves, and something entirely unwelcome is stalking the woods just beyond Sookie's doorstep.

I thoroughly enjoyed this tenth novel in the Southern Vampire world. By now each of the many characters in the series are totally familiar to me and I care about them, wonder about them, have many, many suspicions about them, and always enjoy being with them again. This is especially true for Sookie and Eric, but also for the wonderful Sam, Pam, and Claude, who each make great appearances in Dead in the Family

. Any scene that features Sookie and Pam together has the Angie stamp of approval. As others have mentioned, this one may be the most aptly titled of them all. And I have to say the strong theme of family, in all its incarnations, running through this book was one of the things I liked about it the most. Because it's hard watching Sookie be laid so low. She was always the golden girl, the smart, tough, grins like mad when she's scared out of her gourd girl who I've loved for ten books and who I want to see bounce back in the worst way after the dire events of the last couple books. And, as her relationship with Eric has been one of the highlights of the entire series for me from the beginning, I want to see them be able to actually enjoy being together, without this constant hulking shadow overhead. There were moments of happiness here, but they were few and far between and I found myself sort of holding my breath in between, afraid the next one wouldn't come along soon enough for me or them. But they always did, and the ending was bloody but great. I hope Sookie's able to hold on to her family. I hope things start to ease up for her a bit in future installments, of which I'll be reading every one.