Forget You by Jennifer Echols 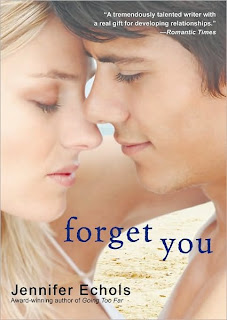 . It was a solid swallow-in-a-single-gulp read and, I have often thought of Meg's "I am full of fear" mantra and smiled. I'm happy it's received the welcome attention it has in the blogosphere and I knew her next romantic drama would meet with a host of eager readers. When I first read the synopsis for Jennifer Echols' Forget You

, I admit I was completely sucked in by the amnesia angle and the whole waking up to find you have a different boyfriend from the boyfriend you thought you had bit. I mean, who's not up for that? So many great possibilities when the protagonist herself doesn't know exactly what's going on. Plus, I enjoyed Ms. Echols' writing quite a bit in Going Too Far

. And nearing the end of July as we are, this book was fast starting to sound like the perfect summer read to me and I looked forward to it with a high degree of anticipation.

Zoey works at her dad's water park--Slide with Clyde--along with all seventeen other members of her high school swim team. All except Doug Fox. The boy who did a year in juvie and always seems to give Zoey a hard time. As captain of the swim team, Zoey runs a tight ship in and out of the pool. Her friends respect her and admire her for her work ethic and her seemingly perfectly put together exterior. Then her dad knocks up his 24-year-old human resources manager and Zoey finds herself racing the gossip home to her mother before things get any worse. And for awhile it seems that everything will be all right. Yes, she and her mother are on their own now as her father is going to leap into his midlife crisis with reckless abandon and marry Ashley. In Hawaii, no less. But then Zoey comes home to find her mother unresponsive on the bed next to a dangerously empty bottle of pills. And suddenly her vaunted ability to keep tight control over her life has disappeared without a trace. Forced to move back in with her furious father, while her mother resides indefinitely in a mental institution for evaluation, Zoey tries to exert a modicum of control over her life and decides to sleep with her longtime friend (and player with a capital P) Brandon. The next thing she knows she wakes up in the hospital, having apparently crashed her car after the party. And, even more mystifying, Doug Fox is attached to her hip. The large gap in her memory appears to include several vital things and Zoey is determined to find out what they are.

I'll just go ahead and start by saying that Forget You

is an example of another great setup that fell very flat for me. Much of the problem was plotting issues, along with an abundance of confusion throughout the story. So many character traits and decisions just didn't add up and I felt like I was constantly scratching my head, like I was missing more puzzle pieces than poor Zoey. I liked Zoey. I felt incredibly sorry for her. Her mother attempts suicide and then gets locked up in the hospital, where no one will allow Zoey to visit. Her father is like something out of a nightmare and the boys that she lusts after are neither of them anything to write home about. Her commutation of a one-night stand into a full-blown relationship with Brandon can be chalked up to her completely understandably disordered mental state. For awhile. But unfortunately I was only able to suspend my disbelief so long. She knows his reputation. She knows the reality of him. And, smart as she is, it seems beyond unlikely she would persist in such an unbelievably unrealistic scenario, when presented with the lovely young hottie by the name of Doug, who clearly wants her. Yesterday. And despite the fact that she so wants him back, she treats him pretty poorly. And he takes it! I mean, he snarks at her a bit, and definitely tries to get her to see the light. But ultimately he takes it. It was hard for me to keep a torch for Doug burning when he kept turning belly up. And not treating her very nicely either, come to think of it. These two were undeniably drawn to each other, but they didn't seem to much like each other. I have difficulty signing on for that sort of deal. I guess I just need a little more than attraction to go on. I couldn't feel the connection between them, much less want them to be together. They didn't leap across the page at me and their magnetism alone just wasn't enough. And so what I hoped would be an absorbing, sweet read ended up an extremely confusing and fractured one. As evidenced by the links below, some people feel similarly and many do not. If you've not ready any Jennifer Echols yet, I highly recommend starting with Going Too Far

and working your way out from there.