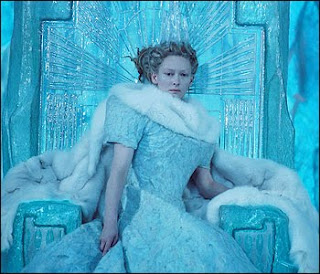 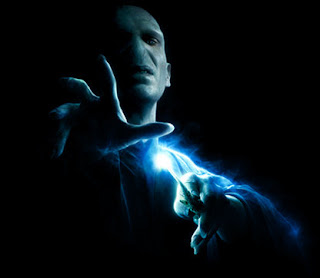 A couple of months ago Ty over at The Lit Connection wrote a post on her favorite villains. What made me smile were the reasons she gave for crushing on these dastardly dudes so, among them because a good villain lives forever and because they have the best lines and are known for being the best dressers. You gotta respect those reasons. I started musing about who would make my own list, but the thing is these aren't just bad boys--these are the villains. These are the ones you run from not to. So I was firm with myself. This list must be comprised of characters I love to hate. Not characters I hate, then love. Or fall for in any way. That's not to say that my feelings about them are completely black or white; the best ones inspire a lot of gray. But these are villains and should be treated with utmost caution. So here they are, my top ten big bads, in the order in which I discovered them:

The White Witch
She was one of the first really big bads I ever encountered and her evil has not diminished over time. She made it always winter and never Christmas. She tried to corrupt Edmund and she murdered Aslan. She's horrid. End of story.

will readily cringe with me here. This was possibly my first science fiction story and the big, sloppy, white brain sitting in all his awful glory in the CENTRAL Central Intelligence building of Camazotz and trying to take over wonderful Charles Wallace will never stop haunting me.

The Black Rider
Our first equestrian villain. And he is black indeed. Appearing when you least expect him, rearing up on his dark horse, framed by ravens and intent on destroying Will Stanton and everything good, the Black Rider fired up my imagination when I first read The Dark is Rising

series and its great battle between Light and Dark.

Cabbarus
Possibly my very favorite Lloyd Alexander villain. He's just so scheming and slippery. You think he's gone for good and then he slithers up like a slimy worm, infesting the whole of Westmark with his insatiable, grasping thirst for power. I love that his reach extends across three whole books and I love watching Theo and Mickle and the gang thwart him.

in seventh grade and that one night still sends chills down my spine. The night I read the scene in which Dr. Jekyll feels his face begin to change and I thought to myself--this is real. This isn't just creepy. And I love that Robert Louis Stevenson was able to evoke that feeling in me.

Duke Roger of Conte
You knew Roger would be on this list, didn't you? How could I not include one of my all-time favorite heroine's arch-nemesis? And that's the beautiful thing about Roger. He's Alanna's great enemy. The whole relationship exists on the grand scale and it's wonderful watching Alanna navigate her life "after" Roger. Plus, as Ty would appreciate, the duke's got style in spades.

Madame DeFarge
Arguably the most awesome villain in all of Dickens, Madame Defarge takes vengeance to a whole other level. With her ceaseless knitting needles clicking away, ending a life with every click, she makes me want to go curl up in a corner somewhere with Syndey Carton and hide until the revolution is over. Ruthless and dogged, she is the perfect villain.

Arthur Huntington
I had to include a truly evil husband on the list, didn't I? Well, Arthur Huntington is the brass ring as far as I'm concerned. All smiles and charm and undying love when he proposes to Helen, Huntington slowly evolves into every wife's nightmare as he abuses everything from alcohol to his wife and child. And even after they escape his clutches, his shadow hangs over the novel making the reader and Helen wonder--will we ever be free?


Satan, Paradise Lost
Okay, this is the only instance where we tread on dangerous ground. Because I may or may not have come just the teensiest bit close to falling for this one. I know. I know. But Milton just does such a good job with the whole anti-hero bit. You want to root for him. You do. Fortunately, you come to your senses. Or at least I did. I think. But still. Well played, Mr. Milton. Well played.

Voldemort
Last but certainly not least, the most recent addition to my list. Again with the great nemesis, but Rowling laid it out so perfectly. I've said it before and I'll say it again--I could not have imagined a more satisfying conclusion to such an entertaining series. And a lot of it is what goes down between The Boy Who Lived and this dude. It wouldn't be the same without a bad guy willing to split his soul seven ways from Sunday in order to get what he wants.

So would any of these baddies show up on your list? Who gives you the deep chills?