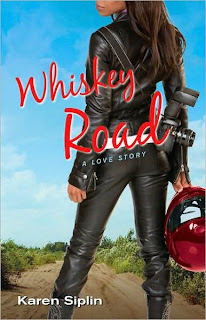 is a perfect example of a book I might never have run across were it not for an unexpectedly fortuitous meeting of two like-minded bibliophiles. Herein also lies a lesson on the beaten path. How many times do we walk into the bookstore and head straight for the YA section or the mystery section or the scifi aisle? And we don't venture into other aisles full of different spines and stories. I ran into Karen Siplin on my first trip to BEA and we discovered we have nearly identical taste in reading material. With the possible exception of Richelle Mead's Vampire Academy series. The jury's still out for me on that one. (Team Adrian!) But we became fast friends and I was eager to read her books after heading home again. I picked up Whiskey Road

one evening several months ago not knowing what to expect and in the mood for something different and involving and good. Happily, it turned out to be everything I hoped it would be.

All Jimi Anne Hamilton wants is to set out on her BMW motorcycle--just herself and her gear--and ride across the country. From California back to her native New York, she's taking a much-needed break from all the chasing and the scandal and the constant hounding of her life as a paparazza and she's going to watch the scenery fly by and see if she can calm down a little. Then she crashes her bike and a  thief steals both her bike and her camera equipment shortly after. Beaten and bruised, Jimi manages to escape with her life and a bag of stolen money intact. Now officially a shambles, she winds up in a small town in upstate New York in dire need of a place to stay and recuperate before meeting up with her brother and his wife and the messy questions that will no doubt follow. Caleb Atwood lives in this small town and, when no one else seems interested in helping the outsider out, he surprises himself by offering her a ride to the nearest bed and breakfast. Against her better judgement, Jimi reluctantly accepts and thus begins their story. As he is the only person she knows in this unsettlingly small town, Jimi just keeps running into Caleb. And, once she takes the time to look beyond his rather pedestrian contractor exterior, she can see that she's not the only one who's taken a few knocks in her life. And maybe it wouldn't kill her to stay a little longer than she had planned.

I read this book over the course of three nights and every night I set it down reluctantly and looked forward all day the next day to being able to pick it up again. Karen Siplin creates a wonderfully quiet and real tone throughout this story in which opposites attract. And I think that's what drew me in the most. There was a decided lack of fake tension or manufactured scenarios and, most importantly, there was time. Time for me as the reader to fall into company with these characters and feel like I understood them and cared what happened to them. And I did. I really did. I think it takes guts to make your protagonist a member of the paparazzi. And an unrepentant one at that. It's a hard, gritty, at times questionable life and everyone around Jimi looks down on her for choosing it as her profession. But it's not what matters to Caleb. When she limps into that diner that first day, everyone else sees the color of her skin and the state of her leathers, but he sees her strength and her individuality. To him she seems somehow above or apart from the usual humdrum of his lackluster life. He wants to know her rather than judge her. For Jimi's part, she struggles not to judge Caleb and all of the backwater rural New York denizens of his fusty town. Used to a fast pace and city life, but hampered by her injuries and basically being at the end of her rope, Jimi is forced to stop racing and take some time. What happens when they both look beyond their usual blinders is extremely sweet and endearing, without ever feeling forced or overly implausible. And the ending is even better. Not tied up with a bow, not unrealistic in its perfection, but touched with just the right amount of maturity, rightness, and possibility. It by no means needs one, but I would read a sequel in a heartbeat. Recommended for fans of Jennifer Cruisie and Julie James.