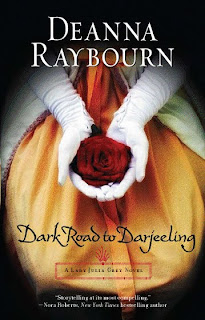 I finished the wonderful Silent on the Moor

last year and knew it would be a long, cold wait for the next book in the Lady Julia Grey series. I was so happy with where the end of that book left my favorite characters. It was in no way an agonizing or excruciating ending, rather it managed to leave me both perfectly happy and aching for more adventures with the indomitable Julia and the elusive Brisbane. So when I managed to get my hands on an e-ARC of Dark Road to Darjeeling

a few days ago, I vowed that nothing would come between me and that book. With a quick weekend trip to DC looming on the horizon, I downloaded the book to my husband's Kindle and decided to let it be the first full book I read on that device, thinking it would be nice to compare the reading experiences on the Nook and Kindle. So, armed with an e-reader and plenty of chocolate, I boarded the plane and settled in for a cozy ride. Turns out, I was in for a much longer ride than I planned on as bad weather delayed our flight from the planned three and a half hours to more like nine. I was so glad I had Lady Julia and Brisbane to keep me company and what would have been a tedious and frustrating journey was actually the most pleasant of times.

A warning: It is impossible to discuss this installment without including one particular spoiler for the previous three books. So, please. If you haven't read them and are concerned about what you do and do not know going in, tread no further. But go simply (and quickly) to your nearest bookstore and purchase Silent in the Grave

. You can come back and thank me later.

Nearing the end of their wedding trip in the Mediterranean, Julia and Nicholas Brisbane unexpectedly meet up with Julia's sister Portia and her brother Plum. The two March siblings are come to convince Julia and Brisbane to follow them to Darjeeling, where Portia's former partner Jane is in much distress. Having been suddenly widowed shortly after becoming pregnant, Jane has endured a few too many months of loneliness and fear in her unfamiliar and foreign home. Based on the increasingly distracted tenor of Jane's letters, Portia is convinced Jane (and her unborn child) are in some danger and she would be much comforted were Brisbane to employ his myriad skills in ferreting out a possible murderer and divining the reason behind Jane's mounting unease. Julia is, of course, keen to join her husband in his efforts and work together as equal partners in the investigation. Brisbane, unsurprisingly, disagrees vehemently. And the tension this conflict engenders threads its thorny way throughout the bulk of the tale. Mysterious neighbors and strangely familiar ones people the small Valley of Eden which Julia and her companions travel to, along with the family of Jane's deceased husband, who each have their own reasons for possibly wanting her and her offspring out of the way for good. Once again, it is up to Brisbane and Julia (whether he will have her or no) to stop the snake in the grass before it strikes again.

I smiled the whole way through Dark Road to Darjeeling

. And I do mean that smile never left my face. It is so soothing to have an author consistently come through for you. The writing, the craftsmanship, the characters, and the setting all come together seamlessly in a Deanna Raybourn novel. A favorite passage early on, featuring the endearingly offbeat March siblings (taken from my uncorrected ARC):


"If Father wanted you to have an escort so badly, why didn't he come himself? He is always rabbiting on about wanting to travel to exotic places."

Portia pulled a face. "He would have but he was too busy quarrelling with his hermit."

I blinked at her and Brisbane snorted, covering it quickly with a cough. "His what?"

"His hermit. He has engaged a hermit. He thought it might be an interesting addition to the garden."

"Has he gone stark staring mad? Who ever heard of a hermit in Sussex?" I demanded, although I was not entirely surprised. Father loved nothing better than tinkering with his country estate, although his devotion to the place was such that he refused to modernise the Abbey with anything approaching suitable plumbing or electricity.

Portia sipped placidly at her soup. "Oh, no. The hermit isn't in Sussex. Father has put him in the garden of March House."

"In London? In the back garden of a townhouse?" I pounced on Plum. "Did no one try to talk him out of it? He'll be a laughingstock!"

Plum waved an airy hand. "As if that were something new for this family," he said lightly.

I ignored my husband who was having a difficult time controlling his mirth and turned again to my sister. "Where does the hermit live?"

"Father built him a pretty little hermitage. He could not be expected to live wild," she added reasonably.

This book in particular put that Cheshire Cat smile on my face because it dealt with that delicate and heady navigation two people engage in after the honeymoon is over. I adore novels that handle that subject well and this one did it flawlessly. Julia's and Brisbane's lives have been changed by their love for each other, but they themselves have not been changed. Those fundamental facets of their makeup, those traits that make them who they are, have not been altered by a piece of paper. And this means that they must learn to work with each other. It's a protracted and intricate process, and Julia's insistence on being part of Brisbane's work is a major stumbling block on the road to marital accord. The really wonderful thing is that it is all laid out so very realistically. And yet, somehow, Ms. Raybourn manages to balance these challenges out with the incredibly intense and genuine love these two dominant people feel for one another. The result is hypnotic. I could read about them all day long (and I did in this case). The rich and fragrant Indian setting formed an exquisite underpinning for the disturbing and dark deeds that take place at the foot of the majestic Himalayas. I went back and forth on who the culprit might be and one new character in particular threw me (and Julia) for a loop. I am still trying to figure out how I feel about what happened there. I have to say, I came to the end of this adventure feeling much the same way I did at the end of its predecessor--perfectly satisfied and more in love with these characters than ever before. Dark Road to Darjeeling


Reading Order: Silent in the Grave

, Silent in the Sanctuary

, Silent on the Moor

, and Dark Road to Darjeeling

Linkage
The Allure of Books Review